'Pretty shocked' by trade, Wale settling in with Rangers

The veteran defenceman has earned praise from his new coach after deadline deal between the Greyhounds and Rangers
Feb 7, 2020 4:15 PM By: Brad Coccimiglio 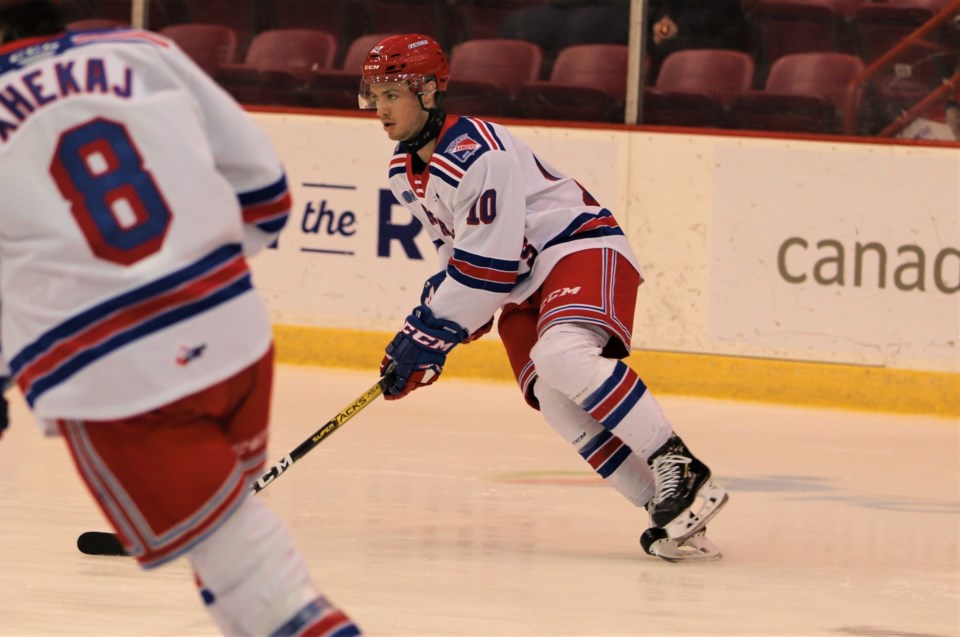 It came as a surprise, but it’s also been a welcomed opportunity.

As the Ontario Hockey League trade deadline passed on Jan. 10, defenceman Holden Wale found himself leaving the only OHL team he had ever known as the Soo Greyhounds dealt the veteran defenceman to the Kitchener Rangers.

The 19-year-old admitted to being “pretty shocked” by the deal.

Wale added he “loved every minute” of playing with the Greyhounds.

The move was an adjustment for the veteran blueliner.

“Just certain things on the ice system-wise (have been an adjustment),” Wale said. “It’s a little bit different but off the ice has been really easy. Everyone has made it really easy for me between by billets, the coaching staff and all the players too.”

With nine games under his belt as a member of the Rangers, including Kitchener’s 5-4 win over the Greyhounds on Wednesday night, Wale’s play has received positive reviews from his new coach.

“He’s been great for us,” Rangers general manager/coach Mike McKenzie said. “He’s quietly playing really well for us. He’s not a flashy player but he fits our style of play. He’s a guy that can skate. He moves the puck. He plays hard. He competes.”

“He’s a great kid in the room,” McKenzie added. “The guys love him. He’s a great teammate.”

With eight defencemen on the roster at the time of the deal, it was an opportunity to give some of the younger defencemen added ice time for the Greyhounds.

“Kitchener was looking to bolster their D by adding a 19-year-old,” Greyhounds general manager Kyle Raftis said of the deal at the time.

Calling Wale “a big part of our blueline this year,” Raftis went on to say the deal was one that worked well for all involved.

“It was a situation that, it was a great opportunity for him to join a team that was loading up and we can get some ice time for some of our younger guys,” Raftis added.

Raftis also spoke of teams being interested in veteran players as they look to make a push heading down the stretch.

The deal has worked out well for the Rangers as Wale has a goal and five points in nine games with the Rangers as the team battles for top spot in the OHL’s Midwest Division.

For Wale, the opportunity to go on a potentially long playoff run is an exciting one.

In his rookie year, Wale was a member of the Greyhounds team that advanced to the OHL final before losing in six games to the Hamilton Bulldogs.

“Playing in the OHL final was a really good experience,” Wale said. “Just the atmosphere of the rinks, the pressure you have sometimes, I can bring some experience to the table from that.”

Playing for a Rangers team that has lost just two games in regulation time since the end of November, a stretch of 28 games, it’s not out of the question that Wale could be looking at another appearance in the OHL final come May.