Kitchener came back from an early deficit, but had quite the scare late in the second involving goaltender Jacob Ingham
Dec 6, 2019 6:39 AM By: Mark Pare 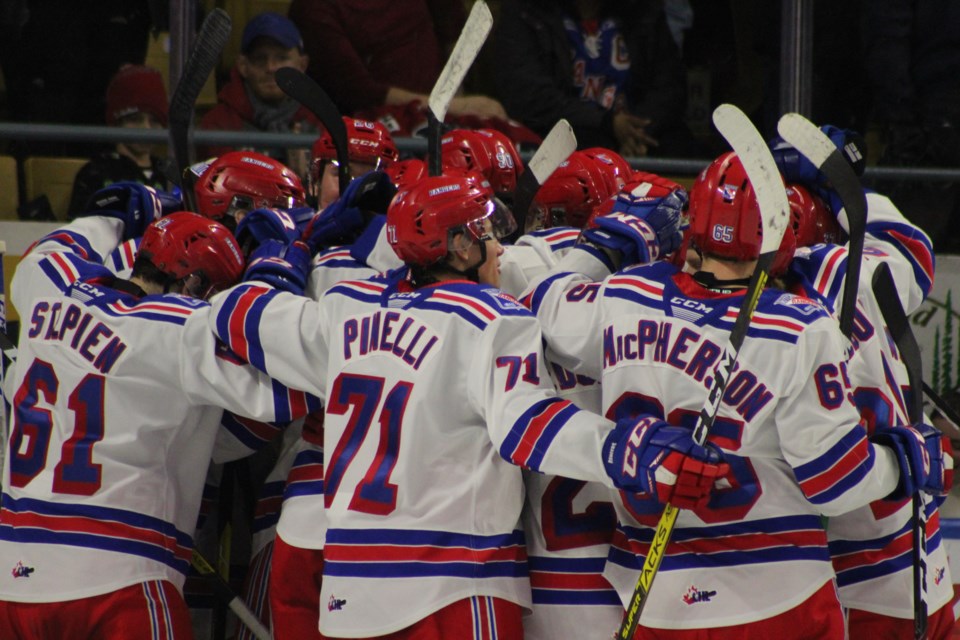 Things looked bleak at first, then scary, then promising and exciting.

What a roller coaster, as the Kitchener Rangers came away with a 4-3 win in Windsor Thursday night, capped by a Francesco Pinelli game-winner with under five minutes left in regulation.

"Tough rink to play in, one of the top 10 ranked team in the CHL, down 2-0, things aren't going the way we wanted," says Kitchener coach/GM Mike McKenzie, "But (we) found a way to get one, found a way to get two and get rolling."

"A lot of grit and resiliency in that room tonight, and it showed and they earned it."

The comeback effort began halfway through the second period, with Axel Bergkvist's first career OHL goal, a rocket from the point on the power play.

"He thought he got his first goal five seconds into the season, and had to wait 20 more games or something after that," McKenzie commented.

"I'm happy that he could get the monkey off his back.  He's been a rock for us the last couple weeks here.  He's elevated his game when we've needed him to."

McKenzie says with Donovan Sebrango serving the first of a two-game suspension, Bergkvist was counted on to play more minutes and step up his game.

And in a moment of "I called it," Bergkvist's brother over in Sweden told him he was going to score his first goal in this contest.

"Special thanks to him," he said in both English and Swedish.

Liam Hawel made things even going into the third, when Jonathan Yantsis scored what could be called a clinical Jonathan Yantsis goal (fighting off a defender at the top of the crease on the power play) to give the Rangers the lead.

Jean-Luc Foudy would tie it up shortly after.  But Pinelli's eighth of the season, and first since returning from the U17's, made the difference.

The first rounder, and Bergkvist, each had a goal and an assist.  Hawel came up with a three-point night with a pair of apples on top of his goal.

Greg Meireles chipped in with three assists, and was 20-7 on the faceoff dot to boot.

But we'll go back to the late stages of the second, and an audible gulp in Rangers nation when goaltender Jacob Ingham was pushed into the goal post on a freak play.

"He was in a little bit of pain, but we chatted with him and he talked to (Athletic Therapist) Cory Birk in between periods," McKenzie said, "They thought it was nothing serious, just a little tweak or a little pain.  He wanted to go back in, and Cory said he was good enough to go back in."

McKenzie and the staff took their time with Ingham, and for good reason, after the veteran was out for seven games in November with an injury.

Ingham made 23 saves for this third straight win since making his return.  Kari Piiroinen stopped 18 shots in the loss for the Spitfires.

Make it four wins in a row since McKenzie took over behind the bench.

Lucas Pfeil is expected to start, with Ingham resting up for a Saturday night tilt in Owen Sound.