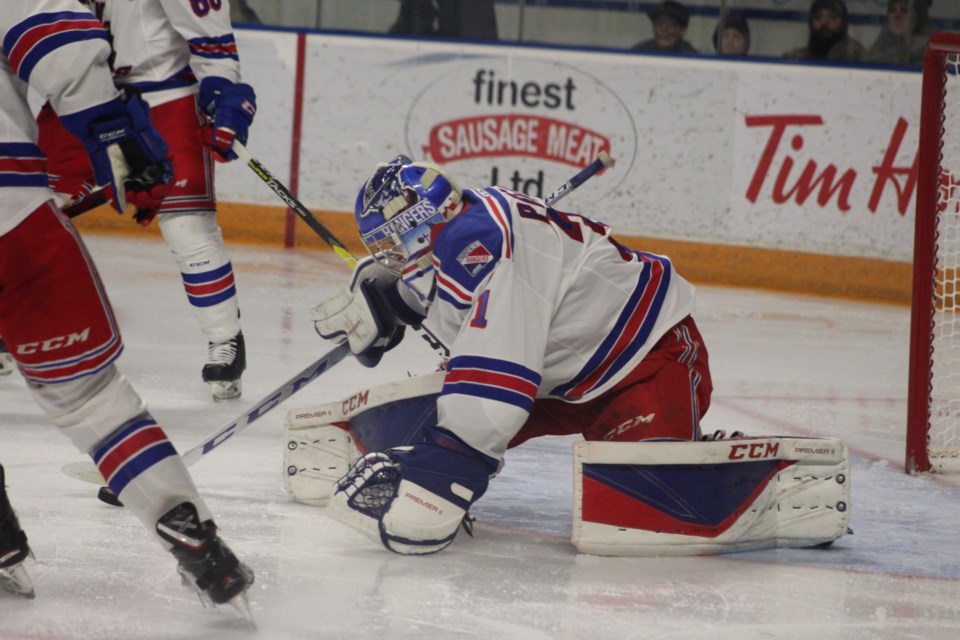 It's a night Lucas Pfeil will never forget.

The Owen Sound native snagged his first career OHL shutout, as the Kitchener Rangers halted the Attack 3-0 Friday night at The Aud.

“It’s pretty cool," Pfeil said of blanking his hometown team, making 24 saves on the night, "Growing up, watching the Attack and then being able to do that tonight was pretty cool so I had fun.”

The win was also the first at The Aud for Mike McKenzie as the new interim head coach.  And he liked what he saw from Pfeil.

“He was exceptional," McKenzie said.

"I thought we played real tight for the first two periods, but he made a huge save for us with about 10 seconds left in the first period, kept the game 1-0. It could have been a huge momentum swing, but he was great the whole way through, especially later in the third when we really needed him.”

Liam Hawel and Isaac Langdon both scored for Kitchener, before Riley Damiani finished off a two-point night with an empty netter.

Plenty for fans to cheer about, as the Rangers look to make The Aud a tough place to play once again.

Everything seemed to be okay at home, with the Rangers winning their first five games in Kitchener, before losing five of their next six.

“Our guys come out, they compete and they feel the energy of the crowd and feed off that,” McKenzie said, “I think we lost (that feeling) a little bit this year, and I think we owed it to the fans to come out and get that back, and it’s something we can build on.”

Suddenly, the Rangers have won two straight games and are tied for the final playoff spot in the West with Sarnia. They also swept a back-to-back after winning in Erie Thursday.

The weekend isn't over, as the Rangers host the Western Conference-leading Guelph Storm Sunday afternoon.