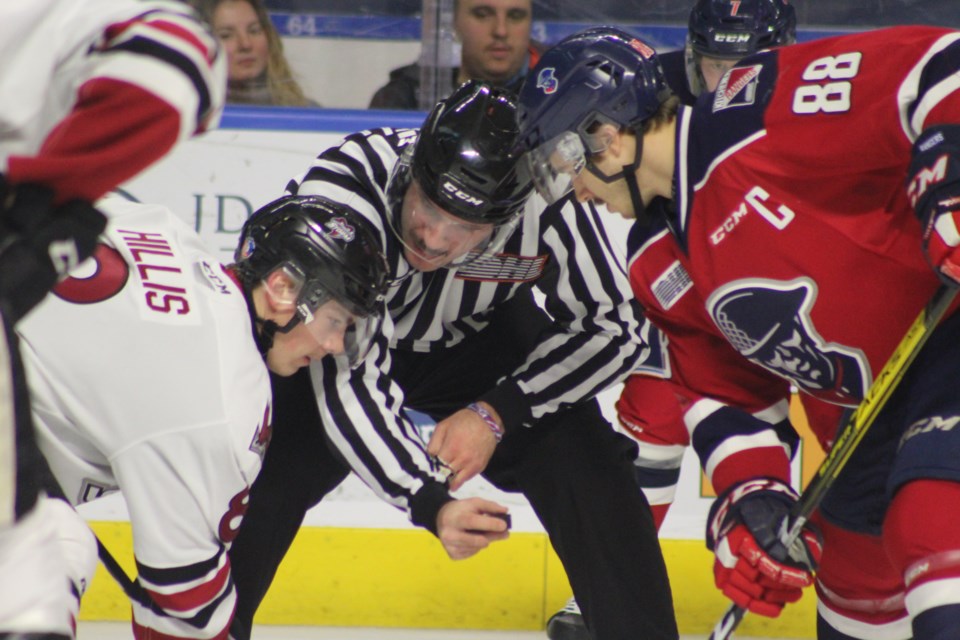 No matter how much depth a team has, the leaders are usually the ones to come through in key situations for any hope of success.

For the Kitchener Rangers, co-captain Greg Meireles’ return to the lineup has been more than beneficial.

After picking up a goal and an assist in his return from suspension Sunday, he followed it up with a career night.

Meireles put up a hat trick, and added three assists for his first six-point effort in a 7-4 win over the Guelph Storm Wednesday night.

With the Storm holding a 4-3 lead late in the second, Meireles came through with his first of the night, tying the game before heading into the third.

He would score the eventual game-winner just over a minute into the final frame, hitting the 30-goal plateau in the process.

It was a wild one late, as the Highway 7 rivalry hit a fever pitch following Meireles’ third marker with just over three minutes left.

The Rangers co-captain was sent to the showers, as was Arber Xhekaj and Storm captain Cam Hillis, all receiving 10-minute misconducts following a dust up.

But it wasn’t just Meireles contributing on the offense.

Reid Valade and Axel Bergkvist each had three assists, while Liam Hawel opened the scoring and added two helpers.

He also got a less than favourable reception from his former home crowd, after he was hit inside the blue line by Fedor Gordeev, drawing a penalty that led to a Jonathan Yantsis marker, part of a three-goal third period.

Serron Noel and Declan McDonnell scored the other Ranger goals.

Jacob Ingham turned aside 27 shots, and improved to 6-0 against Guelph this season.

Owen Bennett took the loss for the home side, making 21 saves and registering his first career OHL assist.

Kitchener is home to the Soo Greyhounds Friday night.

CHL cancels playoffs, Memorial Cup
Mar 23, 2020 6:11 PM
Comments
We welcome your feedback and encourage you to share your thoughts on this story. We ask that you be respectful of others and their points of view, refrain from personal attacks and stay on topic. To learn about our commenting policies and how we moderate, please read our Community Guidelines.