Meireles’ hat-trick leads Rangers to nine wins in a row 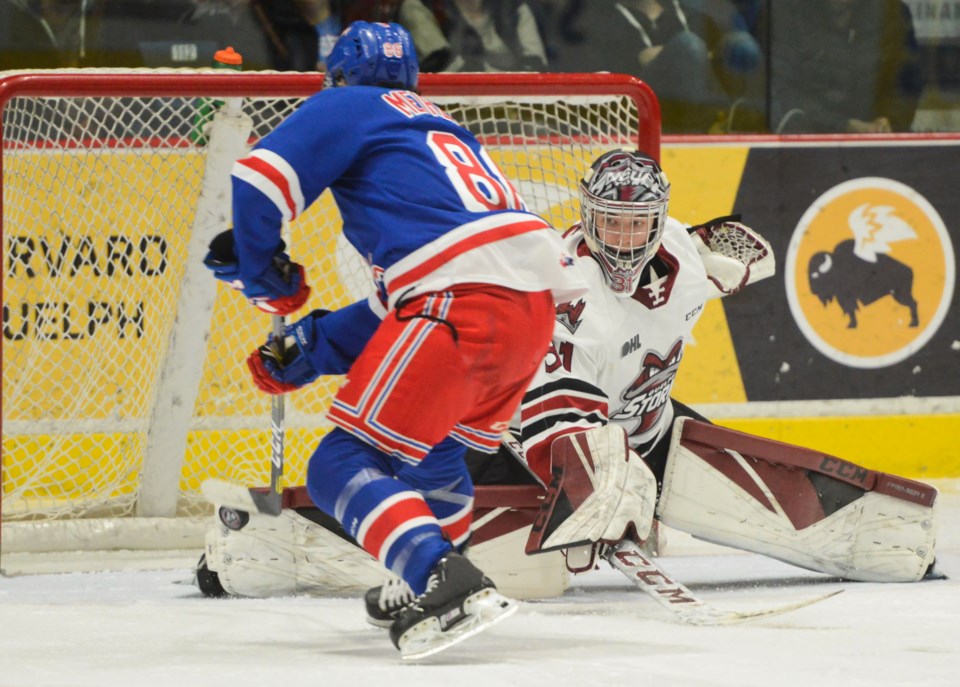 The Rangers are rolling.

There isn’t really much more you can say about this nine-game ride that hasn’t been said already.

Yes, there was a bit of adversity after giving up four goals to Hamilton in the last 10 minutes of Friday's game.

But the confidence built on this current streak was on full display in a dominant 6-1 win over the rival Storm in Guelph Saturday afternoon.

“It was closer to 60 minute (effort than Friday),” says Rangers head coach and GM Mike McKenzie, “There’s always things we can touch up and clean up, but I thought for the most part, all four lines played pretty well all 60, and (goalie Jacob Ingham) was solid again for us.”

“Not too much to knit pick. We didn’t put up nine (goals), but probably overall, it was probably a much better game from a coaching perspective.”

Greg Meireles notched his first hat trick of the season, three goals three different ways, no less --- a shorthanded goal, a power play goal and an even strength goal --- and added an assist for a four-point afternoon.

“It’s really good to get Greg going, he’s been a bit snake bit lately,” McKenzie said, “He’s had chances, they just haven’t gone and today was one of those days where he got one, and then he kept rolling. It’s good to see him get going, he’s one of our leaders. He’s a guy that if we want to win games, he’s got to be at his best.”

Riley Damiani, one of the three players who didn’t register a point Friday, opened the scoring on the power play early in the first.

Gogolev and captain Cam Hillis were otherwise quiet on this day, as Guelph’s top two horses spent the third period on the bench in what seemed to be a message from coach George Burnett.

Declan McDonnell potted a goal in the third period to round out the scoring.

Liam Hawel had a pair of helpers in his return to Guelph, where he spent two and a half seasons and won an OHL Championship back in the spring.

But a big story for the Rangers continues to be the play of import defenseman Axel Bergkvist.

After picking up another three assists, the Swede is up to 13 points in his last 11 games.

In net, Ingham stopped 35 shots for the win. Owen Bennett, who has assumed the starter’s role with Nico Daws occupied with his role on Canada’s World Junior team, made 22 saves for Guelph and was pulled after the second period.

Many of his 22 stops were outstanding, but knowing they have a trip to Oshawa Sunday, the Storm opted for Tanner Wickware in the third to rest Bennett.

Wickware made 18 saves in relief.

Kitchener has two games left before the Christmas break, including a home game next Friday against Sault Ste. Marie.

Before that, the Rangers travel up to the Bayshore for a Wednesday night tilt against the Owen Sound Attack.

Rangers ink Kitchener native
Jan 23, 2020 10:30 AM
Comments
We welcome your feedback and encourage you to share your thoughts on this story. We ask that you be respectful of others and their points of view, refrain from personal attacks and stay on topic. To learn about our commenting policies and how we moderate, please read our Community Guidelines.