James Boyd was announced as the inaugural recipient of the Jim Gregory Award on Monday
May 25, 2020 12:45 PM By: Blair Adams 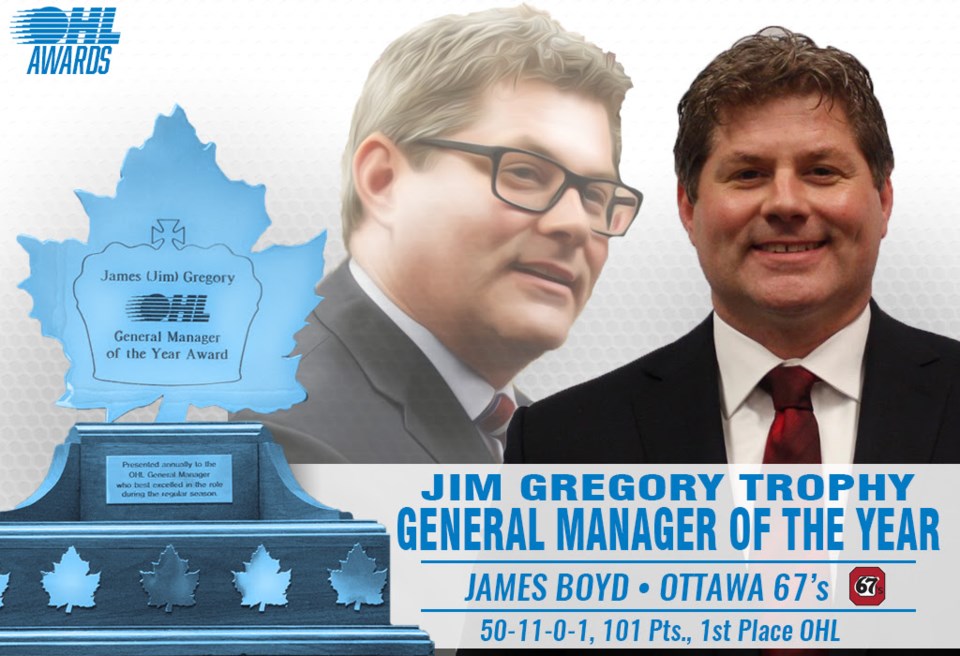 James Boyd of the Ottawa 67's has become the first person to win the Ontario Hockey League's Jim Gregory General Manager of the Year Award.

First announced in August 2019, the award is presented annually to the general manager who best excelled in his role during the regular season.

Gregory, one of the game's great builders and a former long-time NHL executive, passed away in October at the age of 83.

Boyd helped build a 67's team that won a second straight Hamilton Spectator Trophy atop the OHL regular season standings with a record of 50-11-0-1.

Ottawa also  strung together a franchise record 17-game winning streak that spanned from November 16 to January 10.

"This is a tremendous honour for our organization to receive this inaugural award in memory of the late, great Jim Gregory, whose exemplary dedication and class touched so many people in our game," said Boyd. "The shared success of our 67's team would not be possible without the tireless work of Assistant General Manager and Director of Scouting, Jan Egert, and our team of dedicated scouts. Also, Coach of the Year, Andre Tourigny, our coaching staff and development team with their keen interest in team building and player improvement. Most importantly, our ownership group at OSEG, who provide the resources and support for each of our players to pursue their dreams."

The award was voted on by a combination of the league's general managers, as well as a panel of media, and a representative from NHL Central Scouting.

Boyd played for the Kitchener Rangers from 1993 to 1994, before joining Ottawa, then the Belleville Bulls.