In this edition of 'Following Up', we reconnect with former NHL player and Kitchener native Steve Seftel after the release of his book
May 13, 2020 11:45 AM By: Ian Hunter 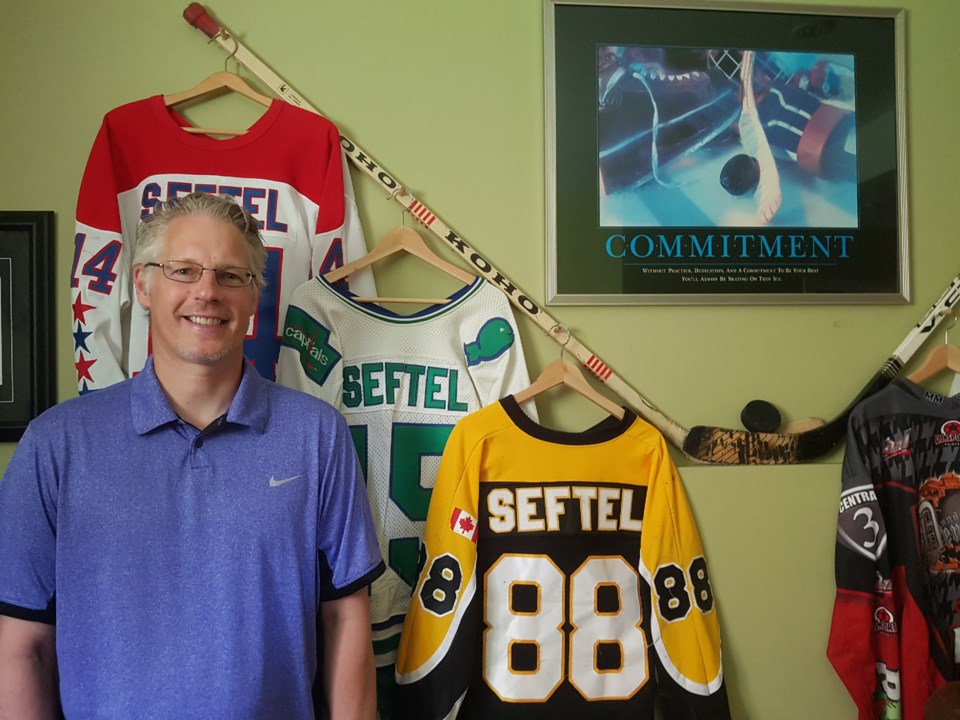 Steve Seftel stands in the basement of his Waterloo home, which is filled with memorabilia from his playing days. Blair Adams/Kitchener Today

For many years, former NHL player Steve Seftel didn’t want to talk about hockey. As a young player, the Kitchener native excelled in the OHL and AHL and broke into the NHL as a member of the Washington Capitals in 1991.

Yet, his hockey career was linked to painful memories.

Now he reads like an open book, chronicling the ups and downs of his career. Last summer, Seftel self-published his first foray into the written word. “Shattered Ice” covered his arduous hockey journey, but also focused on his battle with mental health.

In the months since the release of his book, he’s been overwhelmed by others who have shared similar struggles. An encounter with one of his former classmates at a book signing underscored the importance of being open about mental health.

“I had numerous people come up to me and tell me their story,” Seftel said. “I went to college for two years and one of the guys I went to college with was in tears telling me his story and he just needed to talk about it. It’s little meetings like that that made me realize that there are a lot of people out there that need help.”

After suffering what he described as a breakdown in early 2018, Seftel took to writing as a form of therapy to help deal with his painful past. He brought those memories back to the surface in his book “Shattered Ice”.

Though he’s dealt with mental health issues most of his life, the former Washington Capital had a revelation when his social worker recommended he should research sports broadcaster and mental health advocate, Michael Landsberg.

Once Seftel saw a public figure like Landsberg speaking about mental health and declaring it a sickness and not a weakness, that helped de-stigmatize the issue and gave Seftel the courage to keep moving forward with his story.

“It wasn’t until 2018 that I heard someone openly discussing it. It’s still new for a lot of people,” Seftel said. “I was incredibly relieved to watch those videos and hear Michael speak. I remember that night, as soon as my wife got home I played the video for her and I said: ‘Look at this, you won’t believe it, there’s someone else.’”

Early in the progress of penning “Shattered Ice”, Seftel was reaffirmed on his crusade by two professional basketball players who shared their battles with anxiety and depression: DeMar DeRozan and Kevin Love.

Their declarations served as validation for Seftel and motivated him to tell his tale to the masses. What Seftel initially intended as a diary of sorts for his children turned into an autobiography, with a focus on his mental health issues.

“Initially, I was only writing it for my two sons,” Seftel said. “I knew I had robbed them of a lot of memories because I didn’t like talking about hockey because it brought up a lot of painful memories. But when I heard the two basketball players talking about anxiety and depression, that’s the moment I thought I’m taking this to a larger audience and I’m going to publish this book.”

Not only was the writing and releasing of the book a cathartic process for Seftel, it also allowed him to reconnect with the game he abandoned in the past. He's a coach for the Waterloo Wolves Major Atom Single-A team and he takes solace watching the game through the eyes of budding hockey stars.

Not only has Seftel connected with the next generation of hockey players, but opening up about his struggles has allowed him to reconnect with teammates and coaches from his past. While he felt like he turned his back on his brethren, Seftel’s hockey family was always there.

“Because of the way I felt, I cut all ties with the hockey community when I retired,” Seftel said. “I certainly miss some relationships over the years. Because of that, but I’ve reconnected with some of my teammates and roommates.

“As part of changing my mindset, I had always thought the hockey community turned their back on me. That’s what I convinced myself. They were there. It was me who was pushing them away.”

While the scope of his book has reached as far as England, Australia and New Zealand, Seftel focuses on giving back to the community where he developed a love for the game. He’s looking forward to speaking at local schools as a mental health awareness advocate.

Every year, the stigma of mental health is lessening, and for anyone who struggles with anxiety, depression or panic attacks, Seftel offered some guidance.

“The advice I’d offer is to talk to people, first of all. Whether it’s your parents, your brother, sister, friends, coaches, teachers; don’t be afraid to ask for help. The help is out there. There are different types of help in the community. You just have to look for it.

“The more we reduce the stigma, we will make it easier for people to share their stories. But I think there has to be some ownership as well on the individual where you have to be brave enough to share your story and ask for the help you need.”

Communitech paving the way for the future of autonomous vehicles
Jul 1, 2020 3:15 PM

Kitchener’s condiment king expands his Phlippen family to fellow businesses
Jun 24, 2020 1:00 PM
Comments
We welcome your feedback and encourage you to share your thoughts. We ask that you be respectful of others and their points of view, refrain from personal attacks and stay on topic. To learn about our commenting policies and how we moderate, please read our Community Guidelines.