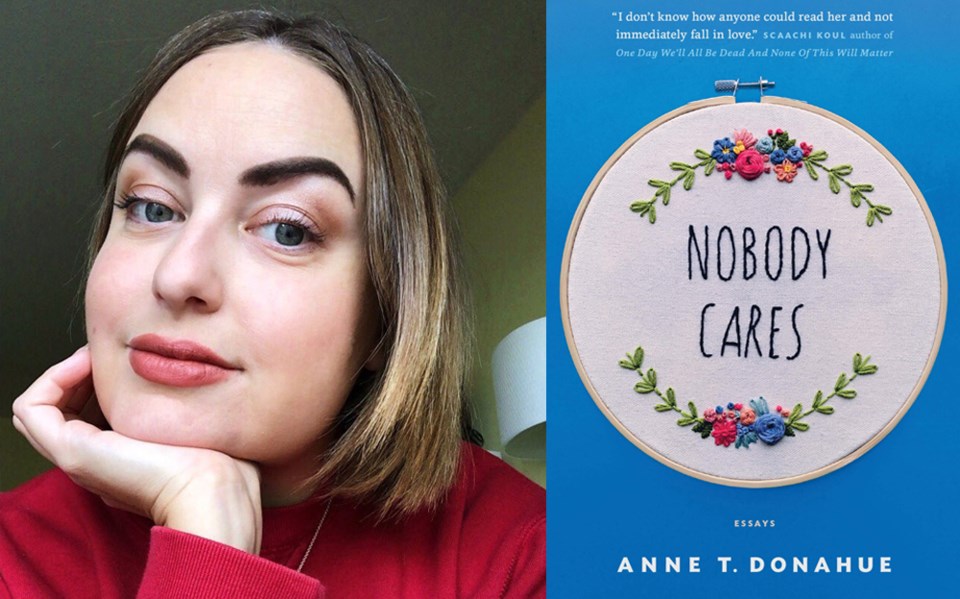 Cambridge author Anne T. Donahue shares these kernels of truth in her first book, aptly titled “Nobody Cares”. The book was released in 2018 and is a collection of personal essays and advice about everyday life.

Donahue honed in on writing in her early 20s and discovered it wasn’t just therapeutic, but she was also pretty skilled in the world of the written word.

“I realized I liked writing, and I had to sort out a lot of my own issues, AKA thinking I could become rich and famous as a writer, which is hilarious,” Donahue said.

“I basically landed on it as a more permanent thing because it was the only thing I did where I was actively doing something, where you’re participating in your own life, as opposed to being a bystander in it.”

She began her career as a music journalist and soon made the move to the bright lights of Toronto. But she soon learned the big city can be quite unforgiving.

Working on a very limited income as a freelance writer, she lost her apartment and moved back home to live with her parents in Cambridge. Donahue found it very humbling to achieve her dream of being a writer in Toronto, only to have it taken away.

"That very harsh lesson in humility was almost more valuable than even getting my first writing job," Donahue said. From there, she picked up the pieces and started rebuilding her life again.

She gained traction on Twitter and developed a loyal following through her weekly newsletter, "That’s What She Said". That led to a publishing company getting wind of her newsletter. Suddenly, ECW was interested in developing Donahue's musings into a book.

The title itself “Nobody Cares” came out of nowhere, as Donahue and the publishers mentioned something in passing, “whatever nobody cares”. They looked at each other and quickly realized they had just inadvertently came up with the name for the book.

“It's like talks I’ve had to give myself. Nobody cares, Anne. It’s fine,” Donahue said. “Nobody’s looking at you. Nobody’s analyzing you. Nobody’s combing through your social media presence all the time.

“People care how you make them feel, and what you stand for, and for the work you do, and the person you are. Those are the things people care about. The idea that you have to live up to some sort of reputation, no, nobody cares.”

Donahue began work on the book in early 2017, and it was published the following year. She’s currently working on the follow-up to “Nobody Cares”, titled “Small Tornadoes”. It’s due for release in Spring 2022.

Where her first book was focused more on dealing with issues in your teens and 20s, “Small Tornadoes” will focus more on subjects when you reach your 30s. Donahue plans to tackle topics like the pandemic, eating disorders, and traumatic experiences, something she experienced herself after crashing her car on the 401.

In writing this new book, the Cambridge native said this offering is anchored more in adulthood, where her first book touched more on topics facing teens and young adults in their 20s.

With her first book, Donahue runs the gamut of topics, covering mental health and dealing with anxiety. It took a while for her to process those feelings, but she unpacked them in book form and has taken solace because it’s helped others with the same issues.

“It always feels really nice when somebody tells you that something you’ve written makes them feel less alone,” Donahue said. “Whereas, when I was in my 20s, I wanted so badly to write because I wanted to be recognized and I wanted this kind of validation where it’s very unhealthy where it’s very external, and it’s not personal, and it’s just based on Twitter followers and Instagram followers.

The pandemic has been difficult and unsettling for everyone, but Donahue relished this unique opportunity to get closer to her parents. She moved back home and appreciates this chance to connect deeper with them not just on the parent-child level, but as fellow adults.

Despite what seems like a swirling wind of calamity in 2020, Donahue iterates there’s nothing wrong with taking a moment to commiserate about the current situation. In fact, that might be what keeps some people grounded in what feels like an ever-spiralling universe.

“It is so freeing to stop pretending. I always feel closer to people who can just keep it real, and we can admit things feel terrible. But you don’t need to face them alone; at least we’re in this together.”

Donahue joked she paints herself as a bit of a cynic, but over the years, she’s come to realize that taking advice or asking for help isn’t a sign of weakness, it’s a sign of being human.

And that’s all anybody can be: human. Open, vulnerable, willing to take risks and admit mistakes.

“It’s like you get humbled in your 20s and then in your 30s, you begin to accept that vulnerability isn’t a weakness,” Donahue said. “It’s okay and you’re not a burden for having feelings or needing to talk out things.

“Even just telling your friends: ‘I’m going through it, guys. Here’s what’s going on.' That doesn’t make you a burden. Vulnerability is the foundation of the best relationships.”

The Maker’s Collective empowering people to chase their side hustle
Jan 27, 2021 1:15 PM

Chief Fun Officer Rebecca Binnendyk explains how to bring more joy into the workplace
Jan 20, 2021 9:26 AM