COVID-19: Canadian truckers worry about entering U.S. due to coronavirus 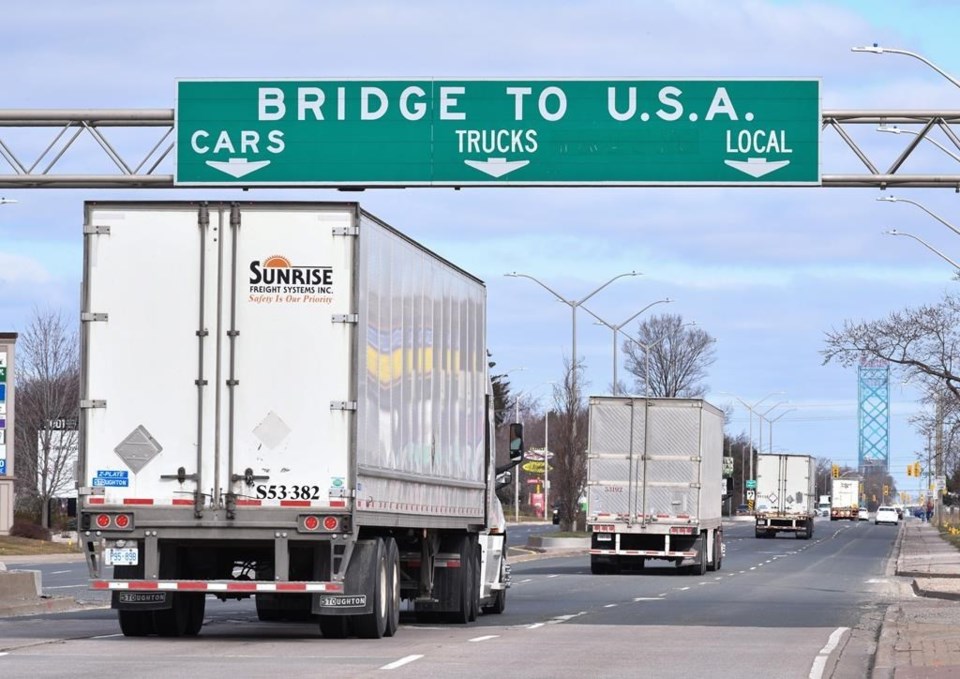 The way some U.S. officials have handled the novel coronavirus pandemic, including reopening the economy when the number of cases continues to rise, has health experts and casual observers worried about what might happen if Canada were to reopen its border too soon.

But for truckers, who are exempt from Canada’s 14-day isolation rules and whose livelihoods often depend upon making back-and-forth journeys between the two countries — transporting everything from raw materials to a huge chunk of Canada’s food supply — crossing the border isn’t something they can necessarily refuse.

Yet some drivers are doing just that. Worried they could catch the virus and then transmit it to family members and others once back in Canada, they’re turning down work in the U.S. in favour of staying closer to home.

“I just don’t trust them,” said Dan Carson, a truck driver from southern Ontario who refuses to work in the U.S.

“(Americans) just don’t seem to take it serious, even with all the numbers and the hotspots, which is basically half the states right now.”

Since early June, the number of daily confirmed cases of COVID-19 in the U.S. has accelerated rapidly, especially in states such as Florida, Texas, Arizona and California, which continue to set records, both for the number of cases and deaths.

Some American politicians, including U.S. President Donald Trump, have also dismissed or downplayed concerns raised by health experts about the virus while urging local and state governments to ease restrictions meant to slow its spread.

For Carson, who said he used to cross the Windsor-Detroit border multiple times a week and who usually vacations in Florida during the winter, the uncertainty of what to expect in the U.S. is enough to make him stay home.

“I’m not about to risk going down into the U.S. and finding out you’ve got to sit inside a crowded drivers’ room with someone who refuses to wear a mask or thinks it’s all a bunch of malarkey,” he said.

According to Transport Canada, roughly 30,000 trucks cross the Canada-U.S. border every day, carrying an estimated $1 billion in goods.

While the overall number of travellers entering Canada each week has dropped significantly compared to last year — by as much as 97 per cent according to statistics provided by the Canada Border Services Agency — cross-border commercial traffic has remained relatively stable throughout the pandemic, with weekly declines averaging between 10 and 30 per cent compared to last year.

Governments and trade experts seem to agree that maintaining the flow of commercial goods, including agricultural products grown and raised on both sides of the border, is critical to keeping grocery store shelves full. It’s also essential to manufacturing, including in the auto and pharmaceutical sectors.

“The economic damage from interrupting the flow of trucks would be both direct and indirect,” wrote William Anderson and Marta Leardi-Anderson from the University of Windsor’s Cross Border Institute in an article recently published in The Conversation.

In total, trucking and logistics employs about 650,000 Canadians, or roughly 3.5 per cent of the country’s workforce, according to a recent report from Trucking HR Canada.

Annually, Canada imports about 65 per cent of fruits and vegetables consumed. The overwhelming majority of this comes either directly from the U.S., primarily California, or Mexico on trucks that travel through the U.S., Somogyi said.

During colder months — November to May — Canadians grow almost none of the fresh fruits and vegetables they eat, he said.

“The (border) is a critical piece of infrastructure for the food security of Canada,” Somogyi said.

Steven Enslow, a trucker from Montreal, was in California in March when the Canada-U.S. border shut down to all but essential travel. The information he received at that time was sporadic at best, he said, and he and many other truckers had no idea whether they’d be allowed back into Canada.

Since then he’s continued driving back and forth between the two countries. He was in Georgia the weekend its economy reopened, which he said was frightening because so few people were respecting physical distancing rules or wearing masks.

At that point, he said, his thinking shifted from “will I catch the virus” to “when will I actually catch it?”

Enslow said he feels lucky that he hasn’t gotten sick so far, despite spending much of the past few months working in the U.S.

He credits this to the fact that most facilities designed specifically for truckers are taking extra precautions. When dropping off shipments or going inside businesses, people are checking temperatures, maintaining distance and requiring masks, he said.

Enslow said he also eats most meals inside the cab of his truck, orders curbside pickup whenever possible and sanitizes everything he uses that other people may have touched.

“As far as going back across the border, I’m OK with it, some drivers aren’t. It’s really a matter of personal opinion,” he said.

Trucking is a solitary business

The Canadian Trucking Alliance, an industry group that represents about 4,500 trucking companies, has created a set of best practices that drivers and owners across Canada are using to keep workers safe.

This includes requiring that all truckers have access to personal protective equipment, such as masks, gloves and sanitizers, taking temperature checks and observing for signs of illness, while maintaining physical distancing whenever possible at all stages of the delivery process.

The organization also says truckers tend to self-isolate far more than workers in other areas of the economy, adding that it’s not unusual for drivers to complete long journeys while only coming into close physical contact with one or two people.

Global News requested an interview with the Canadian Trucking Alliance but was told no one was available. In a written statement, the organization’s spokesperson said that COVID-19 has created challenges for all workers, including truckers, and that measures have been implemented to address them.

“Our industry has gone to great lengths in order to protect the public and industry workers while continuing to deliver essential products Canadians need during these unprecedented times,” said spokesperson Marco Beghetto.

However, despite the added precautions, some drivers still feel the U.S. is unsafe and are doing whatever they can to avoid it.

Jason Carpenter has been driving trucks for close to 30 years. Over the past month he’s worked exclusively in Canada, but this week he’s driving from southern Ontario to Iowa to deliver farm equipment.

The thought of going back to the U.S. is worrisome, he said, especially given the recent spike in COVID-19 cases.

He also worries about what might happen when he re-enters Canada, citing reports from early in the pandemic when truckers were denied access to basic services, including washrooms, food and showers.

Ultimately, Carpenter said, he’s not in a position to turn down work in the U.S., otherwise, he would.

He trusts the company he works for has measures in place that will keep him safe — adding that he’ll do his best to keep away from everyone — but he knows there’s still a risk when crossing the border because of how widespread the novel coronavirus has become.

“You never know what’s going to happen,” he said. “I’m doing the job because I have to.”

COVID-19: Pandemic conspiracies creating a 'public health crisis' in Canada, experts say
Aug 4, 2020 8:30 AM
Comments
We welcome your feedback and encourage you to share your thoughts. We ask that you be respectful of others and their points of view, refrain from personal attacks and stay on topic. To learn about our commenting policies and how we moderate, please read our Community Guidelines.