CANADA: Eating disorders in athletes on the rise amid COVID-19

Studies have shown that feelings of helplessness and fear of loss of control are often at the centre of disordered eating, which sheds light on why, with COVID-19 wiping out any sense of certainty in 2020, unhealthy eating is on the rise among Canadian athletes.
Dec 25, 2020 9:25 AM By: Canadian Press 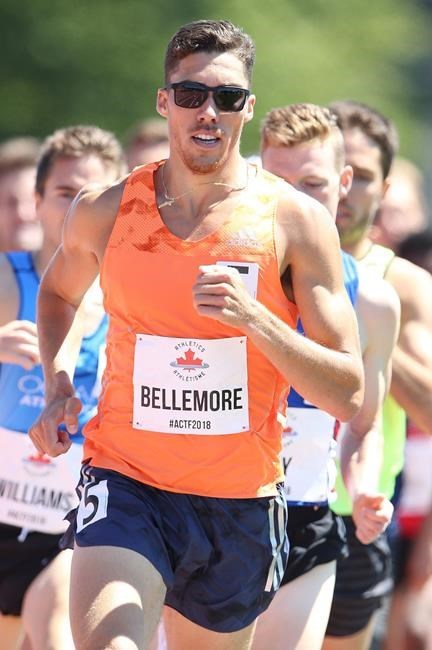 The Canadian middle-distance runner had always listened to his body's signs of hunger, and had eaten a well-balanced diet to fuel his training.

But at a broad-shouldered six foot three, Bellemore is bigger than many 1,500-metre runners and never felt he really belonged in the event, and so in a quest to become smaller he cut way back on his eating.

When he felt hungry, he'd have a nap instead of a snack. If dinner didn't leave him full, he'd just go to bed early.

Studies have shown that feelings of helplessness and fear of loss of control are often at the centre of disordered eating, and so Bellemore can understand why, with COVID-19 wiping out any sense of certainty in 2020, unhealthy eating is on the rise among Canadian athletes.

"Since you can only train at a certain level with whatever resources you have, at least if you're dialed in on your nutrition — or you think you're dialed in — at least you feel like you're getting a gain," Bellemore said. "But it might be an unhealthy behaviour that you just think is a gain."

National organizations Game Plan and the Canadian Centre for Mental Health and Sport (CCMHS) have both seen significant increases in eating disorders in Olympic and Paralympic athletes since the global pandemic began.

"We saw increasing numbers throughout September and October, and then we saw a really big influx of referrals in November, and that has steadily continued," said Poppy DesClouds, the director of care and education at CCMHS. "We saw about three times the referrals (in November) that we usually see in a month. So, that definitely was significant."

DesClouds said there's also been a significant uptick in the severity of concerns athletes are reporting.

"We had a sense that this would happen with the pandemic, but it didn't happen right away," she said. "And it seems like the wave was a little bit delayed, and it really started to hit this fall."

Established five years ago by the Canadian Olympic and Paralympic Committees and the country's network of sport institutes, Game Plan is a high-performance wellness and transition program covering career management, networking, education, skill development and health.

Hoffart said they saw an almost immediate rise in athletes accessing Game Plan for a variety of concerns after the Tokyo Olympics and Paralympics were postponed last March. It peaked it April, waned over the summer then began to climb again in the fall,.

"I started seeing athletes presenting with eating disorders around September, and it's been a couple of pretty significant and severe cases this fall that hasn't been as typical as I've seen in the past," Hoffart said.

Eating disorders often come hand-in-hand with other mental health issues such as obsessive compulsive disorder, anxiety and depression, and studies have shown they're on the rise amid COVID-19, in both athletes and the general public.

The recent increase, DesClouds pointed out, coincides both with the pandemic's second wave, plus the reality of having existed in a pandemic state for 10 months and counting.

"There's a few different pieces. So one part is that in general, mental illness has increased through the pandemic. And obviously, with the change and uncertainty that's happened, a lot of people are struggling with that," DesClouds said.

"There's also so many different pieces that have changed in day-to-day life for athletes."

Athletes are accustomed to keeping tight schedules, and not only have their day-to-day schedules been completely upended by lack of access to training facilities, coaching, etc., but their long-term schedules have been a huge question mark as COVID-19 erased one competition after another.

"There's kind of two things that we've been hearing, and that's the worry about losing out on that regular training and routine that athletes usually have and the standard that they're usually held to," DesClouds said. "So, being nervous that that (fitness level) is going to disappear when they're not at training.

"Or they're taking the kind of rigour of what is usually happening during training and trying to implement it themselves at home while in isolation and while not training. And so their relationship with food and nutrition or exercise becomes something very different from what they're used to."

Numerous Canadian cities have gone back into lockdown to fight the second wave, and the upheaval of hopping back and forth between different levels of isolation hasn't helped, "especially when you're dealing with athletes who are used to having routine and being very strict about the structure in their lives in order to perform," DesClouds said.

Bellemore's eating disorder wasn't related to the pandemic. In fact the forced pause around COVID-19 and injuries have seen the 26-year-old from Tecumseh, Ont., slow down and reflect on his unhealthy behaviours and finally seek medical attention.

Bellemore, one of Canada's fastest 1,500 runners, was forced to face facts after suffering a pair of stress fractures within a few months in 2019 and '20.

"I initially joked about it, like 'Maybe it's because I'm eating less,''" Bellemore said. "But I never truly considered that idea, because I was in the best shape of my life, (I thought) there's no way I would have got an injury from that."

Bellemore is still on the mend. An MRI on Dec. 4 shows his injury in his upper shin has improved to a "stress reaction." He hopes to resume running in the new year. He's also working with sports physiologist Trent Stellingwerff, and has read plenty about RED-S (relative energy deficiency in sport) syndrome, which is impaired physiological function caused by energy deficiency.

The holiday season can be challenging for athletes. Food often plays a leading role in celebrations.

"The holidays should be a positive time. Reflect on the year, enjoy your family or whoever's around you, even if they're a phone call away," Bellemore suggests. "In terms of food, enjoy yourself. Especially if you're an athlete, you've worked hard, month after month after month. If you want that extra cookie, don't stress yourself out or punish yourself about it."

"And acknowledge that it can be a difficult time and it's OK if it is difficult, there's a lot of change happening and a lot of ambiguity surrounding us. And so, it's normal if it doesn't feel like a regular holiday season or if extra support is needed."

This report by The Canadian Press was first published Dec. 22, 2020.