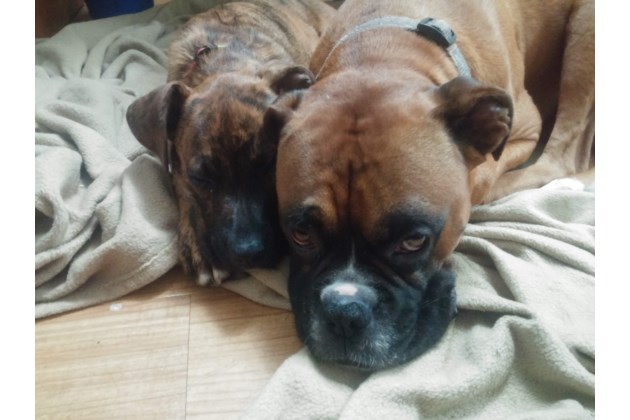 So I have a sad story...my ex and longtime friend has asked for me to tell his story and see if there might be someone out there that could be of help?
So a few months back his dog was picked up by the Kitchener Humane Society at which time my friend went there to pick up the dog and K.H.S handed the dog to him no problem and no questions asked. However, a few days later the dog got picked up by K.H.S again. My friend couldn't retrieve the dog this time because he was incarcerated but asked his mom and daughter to call and inquire about retrieving the dog for him. Sent his daughter a letter giving her permission to go get the dog. When his daughter phoned to make arrangements to get the dog the K.H.S. said they had already adopted the dog out. Of course this infuriated his daughter and his mother as they kept in touch with the society to assure that the dog was safe and were still trying to make arrangements to pick up the dog.
It turns out they adopted the dog out because they couldn't reach my friend. Remember I said earlier that my friend was incarcerated but took the steps to insure the dog could be released to his daughter. The dog is my friends best friend and he rescued the dog from a couple that were users and had the dog locked in a cage all day. Another incident occured that the home he lived in was broken into and the dog was abducted. A call to the Kitchener-Waterloo Record covered the story front page. This story has a happy ending where someone phone the police and said they knew where the dog was. The police retrieved the dog and returned him home was the best and happiest day of our lives. As I was the one who took the initiative to make arrangements for the paper interview us and cover the story.(it was on July 1st when we were enjoying fireworks in Guelph). The dog is more than just a dog he is our family our son just like before when he got stolen from our home it feels like the Kitchener Humane Society has abducted and literally stolen our son when his owner was helpless but did take some measures i.e.:having his daughter and his mother enquiring as to ensuring the return of his best friend, only to be let down and lose the only thing that he has been truly responsible for his whole life. Please help me by reposting and liking this in hopes it may reach the people involved and may they take pity and return our son to us. His name is Justice, he is a pure bred German Boxer, he has 4 white paws and a small tuft of white hair on his head. He is almost 9 years old. Please have a heart this dog has been a part of our family for a long time. This is a picture of him chillin' with his daughter who I currently own and love.