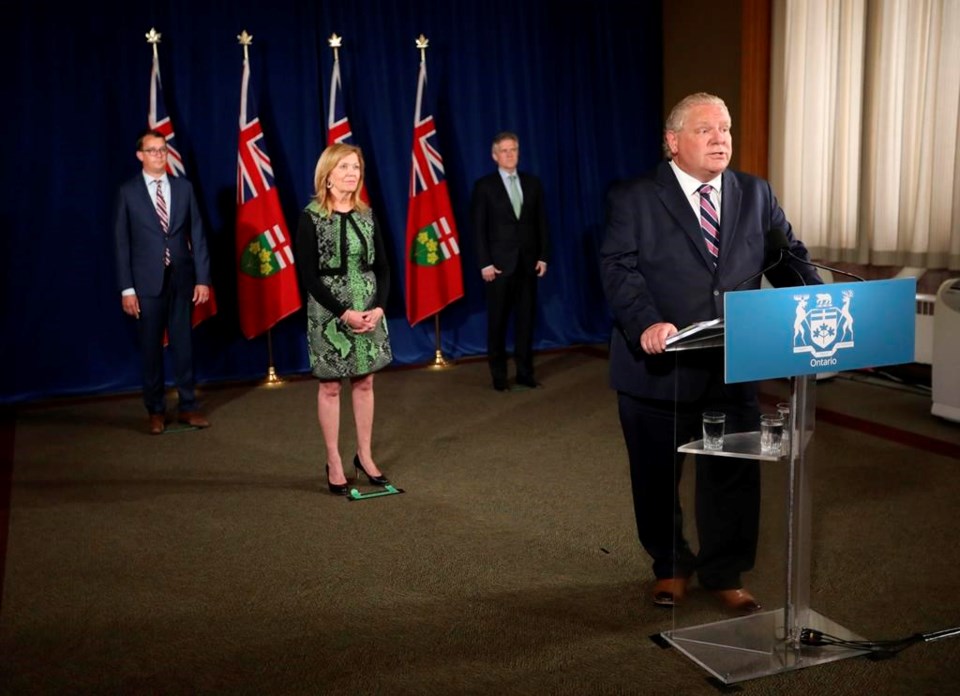 That will leave Windsor-Essex as the only region of the province still in Stage 1, which Premier Doug Ford blamed on farmers in the region not allowing for enough testing of migrant workers, amid deadly outbreaks there.

"No one wants to see every region of Ontario open more than I do, but we have to do it right and unfortunately right now the threat of this virus in Windsor-Essex is still too great," Ford said.

"While we've seen the trends improve in Toronto and Peel, we haven't yet seen those targets met in Windsor."

Provincewide there were 161 new cases of COVID-19 reported Monday and three more deaths.

That's the lowest total of new daily cases since late March and brings the province to a total of 33,637 cases, including 2,609 deaths and 28,933 resolved cases. The number of resolved cases continues to grow more quickly than active ones.

The number of people in hospital with COVID-19 and those in intensive care and on ventilators all dropped, to the lowest levels since the province started publicly reporting them at the beginning of April.

"Ontario is heading in the right direction because everyone is doing their part. We're seeing the trends go the right way. We're hitting our markers. We're taking a cautious approach and this is helping Ontario move forward."

Two migrant workers have died in the region due to COVID-19 since the start of the pandemic and the Haldimand-Norfolk Health Unit reported that a migrant worker in their area has died amid a farm outbreak there.

The farm currently has 199 infected migrant workers and 18 other people associated with the farm who tested positive for COVID-19, the health unit said.

Toronto Mayor John Tory said that he thought the timing of the city's partial reopening was as good as it could get.

The mayors of Brampton and Mississauga in Peel Region welcomed the premier's announcement, saying it came at the right time.

"Friends and family will once again be able to enjoy a cold beer on a patio, a dip in the pool, play a game of soccer, or get a haircut with their favourite stylist or barber," Mississauga Mayor Bonnie Crombie said in a statement.

"Our local businesses who are our friends, neighbours and family members will need our help to get back on their feet after what has been a very challenging time."

In addition to bar and restaurant patios, Stage 2 includes the resumption of tours such as bus and boat ones, some outdoor activities such as paintball, mini golf, and go-cart tracks, splash pads, wading pools, and swimming pools.

Tattoo parlours, barber shops, hair salons and beauty salons will be allowed to reopen with health and safety measures in place, but not for services for someone's face such as facials, eyebrow grooming and makeup.

Stores in malls can reopen, as can museums, galleries and zoos while limiting the number of visitors through measures such as timed entry. The Royal Ontario Museum tweeted that it would have a reopening announcement shortly.

While as of Wednesday, all of the province except Windsor-Essex will be in Stage 2, Health Minister Christine Elliott suggested it would take more time before any region enters Stage 3.

"So we haven't done that analysis yet because it hasn't been long enough."

About half of Ontario's public health units reported no new cases Monday.

Ontario's document laying out Stage 2 indicated that an eventual Stage 3 will include dining in restaurants and bars, resuming performing arts shows and cinemas with limited seating capacity, as well as reopening casinos, gyms, amusement parks, and playgrounds.

This report by The Canadian Press was first published June 22, 2020.

Montreal's St-Joseph's Oratory seeing less tourist traffic due to COVID-19
Aug 9, 2020 2:55 PM
Montreal police looking for key witness in two slayings last week
Aug 9, 2020 1:47 PM
Comments
We welcome your feedback and encourage you to share your thoughts. We ask that you be respectful of others and their points of view, refrain from personal attacks and stay on topic. To learn about our commenting policies and how we moderate, please read our Community Guidelines.