TORONTO — Pascal Siakam began the unofficial start to the second half of the NBA season with some fresh legs.
0
Feb 21, 2020 11:42 PM By: Canadian Press 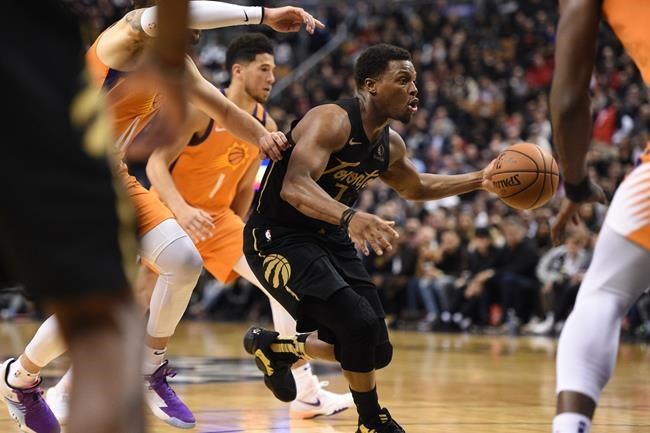 TORONTO — Pascal Siakam began the unofficial start to the second half of the NBA season with some fresh legs.

He set the tone for Raptors with 37 points, including five three-pointers, and 12 rebounds to lead Toronto to a 118-101 win over the Phoenix Suns Friday in the teams' return from the all-star break.

"When you're making shots, it feels good and everything looks good," said Siakam, who played in the all-star star game in Chicago last weekend for the first time in his career.

Siakam,had one of the worst three-point percentages when he broke into the NBA during the 2016-17 season at .143. He's steadily improved that to a point where he's become a threat whether he drives to the hoop or stays at the perimeter.

"It's just that he's put the work in," said Kyle Lowry, who also had a double-double with 13 points and 10 assists. "He understood early in his career that the only way he was going to get on the floor was making threes."

Toronto has won eight in a row at Scotiabank Arena.

Devin Booker scored a team-high 21 points for the Suns (22-34), who have dropped seven of their last nine games. Deandre Ayton recorded a double-double with 17 points and 10 rebounds.

The Raptors, playing their first game in nine days due to the all-star break, showed some signs of rust early in the game by committing four turnovers in the opening five minutes and five in the quarter. The Suns failed to take advantage by shooting just 35 per cent in the first frame.

That's when Siakam went to work, scoring 14 points to give Toronto a 31-23 lead after one quarter.

The Raptors pulled further away from the Suns in the second as Terence Davis scored nine points, including five in the opening 1:21 of the frame.

Suns head coach Monty Williams called a time out to settle his team down, but the Raptors continued to find accuracy in their shooting. They finished the half at 53 per cent from the field and led the Suns by as many as 26 points.

Siakam had 25 points in the opening half as Toronto led 67-43 at the break.

The Suns began to chip away at the Raptors' lead in the third quarter, bringing it down to 13 at one point.

"The game lost its rhythm and every ounce of enjoyability in the third quarter," Raptors coach Nick Nurse said.

Raptors coach Nick Nurse attempted to challenge the foul call, but it was not allowed because his timeout and challenge attempt occurred after officials handed the ball to Booker for the technical free throw.

"They saw me jump off the bench on the call but then they couldn't see me call the timeout," Nurse said of the sequence with the officials. "Selective vision."

Lowry also received a technical foul later in the quarter.

The Suns continued to cut into Toronto's lead in the fourth, getting their deficit down to single digits.

Toronto was up 102-95 with 5:13 to go when Nurse used his challenge on an offensive foul charged to Fred VanVleet. The call was confirmed.

Ibaka checked into the game in the fourth quarter for the first time since picking up his fifth foul in the third. Ibaka hit a three-pointer immediately to restore Toronto's lead to double digits.

"I was leaning on doing it earlier than I did but then Rondae (Hollis-Jefferson) had a good stretch going there," Nurse said about the timing of the Ibaka substitution. "When we get down to to six or five (point lead) we may as well do it."

This report by The Canadian Press was first published Feb. 21, 2020.

CFL postpones start to 2020 regular season due to COVID-19 pandemic
Apr 7, 2020 5:37 PM
Comments
We welcome your feedback and encourage you to share your thoughts on this story. We ask that you be respectful of others and their points of view, refrain from personal attacks and stay on topic. To learn about our commenting policies and how we moderate, please read our Community Guidelines.