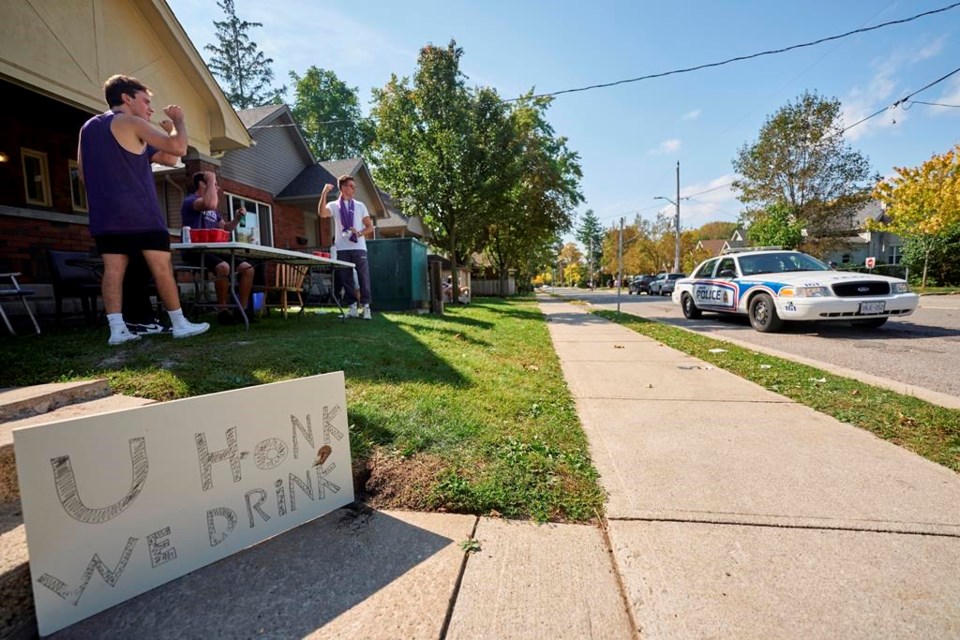 London, Ont., police said Saturday began quietly and with no known public health infractions in the university town known to host large parties on the same weekend each year.

Western University students usually celebrate a "fake homecoming" on the last Saturday in September, a tradition that's been discouraged this year due to the COVID-19 pandemic.

Authorities were monitoring to ensure provincial gathering limits were being followed among students at the school where at least 39 people have tested positive for COVID-19 since classes began.

Const. Sandasha Bough said by phone that officers were on the streets near the university.

As of shortly after noon on Saturday, she said only small outdoor gatherings had been observed.

Social media posts from the city over the last few days have reminded people of possible fines up to $10,000 for hosting a large gathering and $750 for attending.

The Middlesex-London Health Unit has also been speaking directly to students on social media in the days leading up to the expected festivities.

On Friday, a Twitter post from the public health unit thanked students for their adherence to health guidelines since outbreaks among students were reported earlier this month. It also asked them to spread the word to their peers.

"We’ve been impressed with the efforts of the (Western) students who have helped limit the spread of COVID-19 recently," the post reads. "You’ve stayed away from big gatherings & parties, kept physical distance, worn your masks & kept your social circles small."

Another tweet reminded students that law enforcement would be keeping an eye on parties this weekend, noting possible fines, reprimand from the university and the risk of catching COVID-19.

"The consequences of large gatherings are real," the post reads.

Western University will host its official homecoming virtually in October.

The university said in a Saturday statement that it's working with health officials to discourage "nuisance parties" this fall, communicating across campus and online on the need to remain vigilant about COVID-19.

"We are encouraged by reports this week from the mayor and city bylaw enforcement of increased compliance, fewer gatherings and reduced get-togethers from last weekend," the statement said.

"Having said that, the university is prepared to use the full force of the code of student conduct should students risk the health and safety of the community through their actions."

The university suspended non-academic, in-person activities amid news of COVID-19 outbreaks among students this month.

Clubs, athletics and events have been put on hold, and restrictions instituted on libraries and other campus buildings.

"Thank you for what you’ve done and please keep up the good work," he wrote.

This report by The Canadian Press was first published Sept. 26, 2020.