TORONTO — Ontario will be testing asymptomatic front-line health-care workers starting this weekend, doing a second round of COVID-19 testing in long-term care homes and will soon launch an advertising campaign, Premier Doug Ford announced Friday.
May 22, 2020 4:03 PM By: Canadian Press 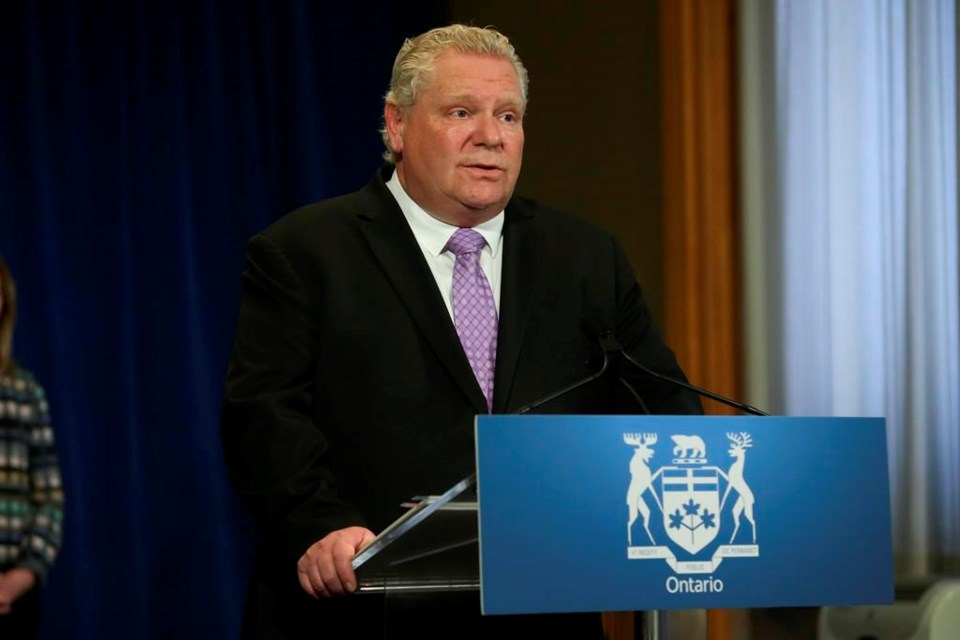 The measures are part of Ontario's efforts to boost testing levels, which dropped sharply after a blitz of nearly every long-term care resident and staff member was completed, just as the province officially entered its first stage of reopening.

The number of daily tests reported Friday was 11,276 — a fifth straight day of falling well short of the province's capacity of over 21,000.

Ford, who has publicly expressed frustration with the relatively low testing levels in Ontario, also said he is eyeing a provincial expansion of a mobile spot testing model one local health unit announced Friday.

Ontario will begin testing residents and staff in seniors' homes, both symptomatic and asymptomatic health-care workers, and going back to long-term care homes, Ford said.

Meanwhile, the Windsor-Essex County Health Unit is forging ahead with a new strategy that includes voluntary drive-thru spot testing.

Dr. Wajid Ahmed, the medical officer of health, announced a plan to ramp up testing in the community where there are currently more than 840 cases of the virus.

Ahmed said he is working on a plan to ensure tests can be accessed at local doctor's offices and will begin random spot testing in the community with the help of local paramedics.

"We will be offering a combination of a drive-thru testing and a trailer-based testing at different locations across Windsor and Essex to make it truly random, and have a true sense of community spread," he said.

"The plan is to pick a spot in the community where we can find many people outdoors, and offer spot testing after collecting baseline information. You do not have to have any symptoms to get tested in that random testing."

"The more testing the better," he said. "So, way to go Windsor and the public health unit out there. You're doing a great job. Keep going. We're going to expand this right across the province."

A day earlier, Ford had mused about using mobile testing vans, doing increased testing by postal code, and targeting groups of people such as truck drivers, automotive workers and those in food manufacturing facilities.

But the medical director of Toronto Western Hospital's COVID assessment centre said there is a large disconnect between what political leaders are saying and what's actually happening on the ground.

"Is there a testing strategy in Ontario?" Dr. Camille Lemieux said. "I'm going to be honest with you. I don't know. I have not seen one."

Lemieux said broad-based testing should be accessible to everyone, but that's not what is actually happening.

The province started the pandemic with assessment centres that had very restrictive rules to get tested. That has entrenched a belief amongst many in the public that it's difficult to get a test, she said.

Ontario clarified its testing guidelines last week for the general public to say that anyone with symptoms can be tested, but an expected influx of people did not materialize at assessment centres over the long weekend.

Ford said Friday that an advertising campaign will soon roll out in areas with higher concentrations of cases.

"If I've got to make robocalls to get people out, I will," Ford said.

Lemieux said the government needs to test for, and find, people who have COVID but whose symptoms are so mild they don't even know it. Those people are unknowingly spreading the virus and would likely not seek out a test.

"The spotlight is in the wrong place, the conversation needs to be about strategy," he said, adding that along with sentinel testing, regular random testing would help the province determine community spread.

"We know there's a piece of the iceberg we can't see," he said. "We don't know how big it is and we don't know if it's getting bigger or smaller.

The province reported 441 new cases Friday, and 28 more deaths. That brings the provincial total to 24,628 — an increase of 1.8 per cent over the previous day's total.

Ontario's growth rate in cases has steadily hovered between 1.5 and 1.9 per cent for 12 of the past 13 days.

Chief medical officer of health Dr. David Williams has said the numbers are in a plateau, and called it disappointing.

This report by The Canadian Press was first published May 22, 2020.

Renowned Canadian photographer Edward Burtynsky donates archive to Ryerson
Nov 24, 2020 12:10 PM
Outbreak declared after six from Nipissing University test positive for COVID-19
Nov 24, 2020 11:49 AM
Comments
We welcome your feedback and encourage you to share your thoughts. We ask that you be respectful of others and their points of view, refrain from personal attacks and stay on topic. To learn about our commenting policies and how we moderate, please read our Community Guidelines.