TORONTO — Ontario will stop giving out first doses of the Oxford-AstraZeneca vaccine for now due to an increased risk of a rare blood-clotting syndrome linked to the shot, a move the province's top doctor said was made out of an abundance of caution.
May 11, 2021 6:32 PM By: Canadian Press 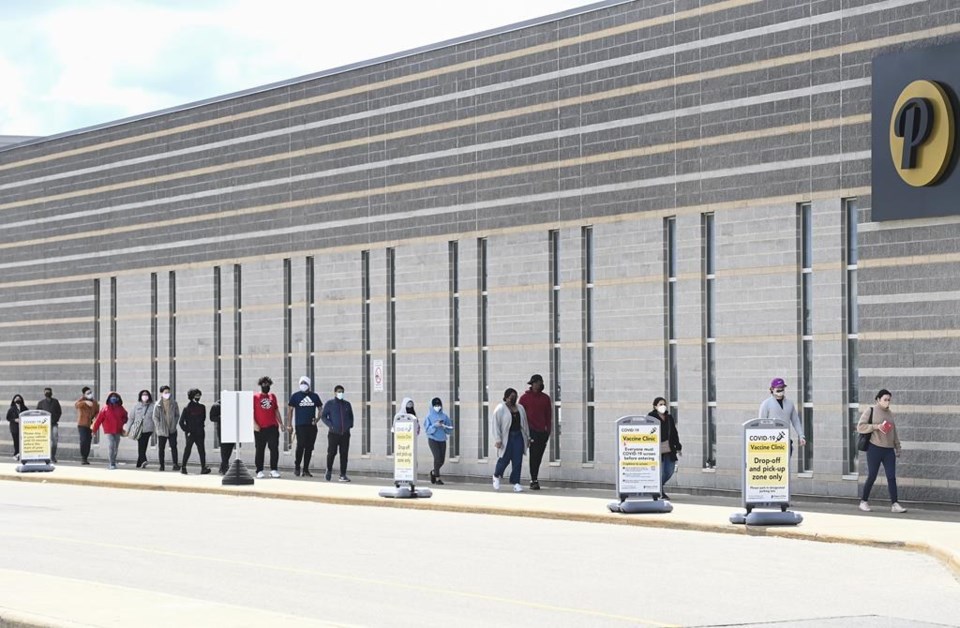 TORONTO — Ontario will stop giving out first doses of the Oxford-AstraZeneca vaccine for now due to an increased risk of a rare blood-clotting syndrome linked to the shot, a move the province's top doctor said was made out of an abundance of caution.

Chief medical officer of health Dr. David Williams said that in recent days, the province has noticed an increased rate of vaccine-induced immune thrombotic thrombocytopenia (VITT), which has been linked to the AstraZeneca shot.

Williams said the province is now looking at the available information and consulting with the federal government and its science advisers to determine the next steps for future use of the shot.

"We are reviewing the data to consider options for the use of the AstraZeneca vaccine for second doses and more broadly moving forward," Williams said.

Ontario's move comes hours after Alberta said it won’t give out more first doses of the AstraZeneca vaccine for the time being because there aren’t any confirmed shipments coming.

Williams said Ontario made the decision, in part, because of an "increased and reliable" supply of the Pfizer-BioNTech and Moderna vaccines and a continued downward trend in COVID-19 cases.

The blood-clotting syndrome linked to the AstraZeneca vaccine is extremely rare but can be fatal.

In Ontario, at least eight cases have been confirmed out of more than 901,800 doses given, but no deaths have occurred in the province linked to the blood clots.

"This is really out of an abundance of precaution," she said. "And that's why we have a vaccine safety surveillance system, to identify these early signals that relate to safety and take action on them."

Williams said that data from the U.K. suggests there is much lower risk of blood clots in second doses of AstraZeneca.

Ontario is preparing guidance for people who already received a first dose of AstraZeneca on what to do next, he said.

"We maintain that those who received their first dose with the AstraZeneca vaccine did absolutely the right thing to prevent illness and to protect their families, loved ones and communities," he said.

Ontario said it has 49,280 doses of the AstraZeneca shot remaining in the province.

The province, along with others, is also awaiting results of a clinical trial in the United Kingdom looking at giving a different vaccine for the second dose.

That would allow people who got AstraZeneca first to be given Pfizer or Moderna for their second dose.

Another group of people who cannot work from home including grocery store, restaurant and transportation workers also became eligible to book a shot.

Starting Thursday, anyone 40 or older will be able to book a shot anywhere in the province.

The government said it has been able to expand eligibility to more age groups because it is expecting to receive millions of COVID-19 vaccine doses in the coming weeks.

Ontario said it expects 65 per cent of adults to have their first dose of a COVID-19 vaccine by the end of May.

The province reported 2,073 new cases of COVID-19 on Tuesday and 15 additional deaths from the virus.

The case numbers were based on more than 28,100 tests completed since the last daily report.

The province said there are currently 1,782 people hospitalized with COVID-19, including 802 in intensive care units.

This report by The Canadian Press was first published May 11, 2021.