TORONTO — People without COVID-19 symptoms should no longer be going to Ontario's testing centres, the government said Thursday, as it looked to tackle crippling lineups at its assessment sites.
Sep 24, 2020 3:47 PM By: Canadian Press 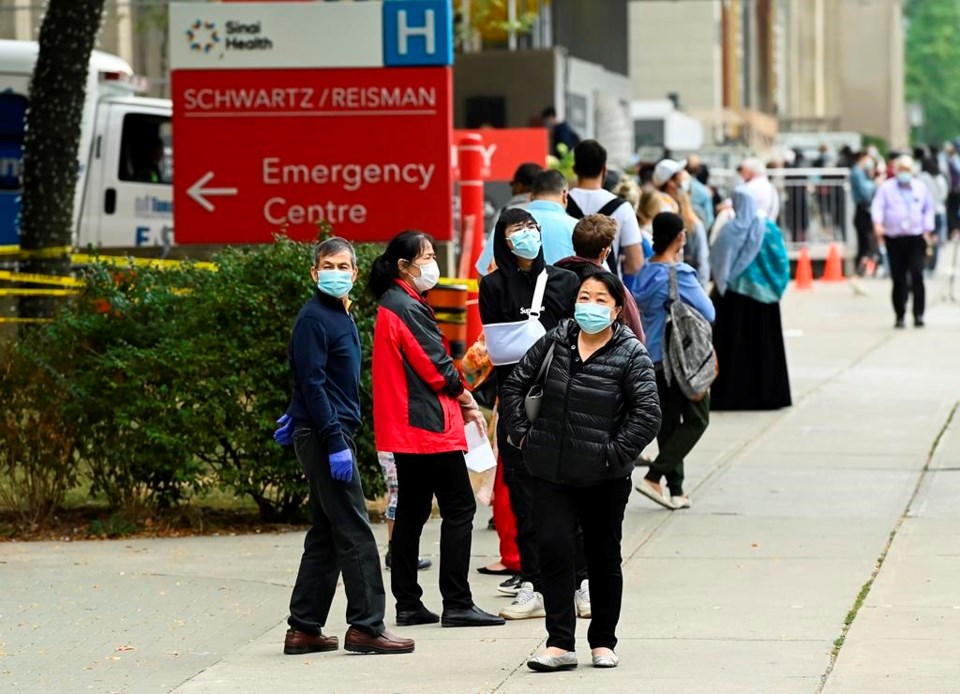 TORONTO — People without COVID-19 symptoms should no longer be going to Ontario's testing centres, the government said Thursday, as it looked to tackle crippling lineups at its assessment sites.

The significant change comes after the province spent months saying that anyone who wanted a test could get one.

Premier Doug Ford, who has faced weeks of criticism over long waits at assessment centres, said the province now needs to target those most at risk.

Assessment centres will now test people with symptoms, those who've been exposed to a case and high-risk workers. Testing will also be available to people involved in outbreak investigations conducted by public health units.

The government said earlier this week that low-risk asymptomatic people can get appointment-only tests at up to 60 pharmacies but clarified Thursday that the initiative would only apply to certain individuals, such as those with loved ones in long-term care homes or close contacts of a case.

That means some people with no symptoms who are simply seeking reassurance they don't have the virus will not be able to access testing offered by the government.

Ford acknowledged that he had been one of the most vocal supporters of wide-spread testing, but said busy assessment centres have been telling the government that most people showing up for tests have no symptoms.

"Earlier today our top health experts told us we need to prioritize those who are at greatest risk," he said. "We need to be nimble."

The province had a processing backlog of 53,840 tests as of Thursday as demand for the assessments has surged because of the return to school.

Ontario's associate chief medical officer of health said the province needs to focus on positive cases, their contacts, and outbreaks to trace and contain spread of the virus.

"Your average person out there who is not exposed to a case, is not part of an outbreak, or has no symptoms, should not be going for testing," Dr. Barbara Yaffe said. "There is no value."

Ontario Health CEO Matt Anderson said the new guidance will be issued to the province's assessment centres Thursday and take effect Friday. He expected assessment centres could start turning asymptomatic people away at that point.

"We want to ensure that we have the testing capacity for our priority populations," he said, adding that a full communications plan will ensure the new rules are explained to the public.

NDP Leader Andrea Horwath accused the government of "rationing testing" because it didn't plan ahead.

"It is shocking to see how chaotic this government is and how much they're floundering in terms of their response," she said, adding that the change in testing strategy was creating confusion.

Green party Leader Mike Schreiner said the government should have expanded the province's testing capacity weeks ago to avoid this problem.

"I'm glad the premier has finally awoken to the chaos at testing centres, where families are being turned away at the crack of dawn," he said. "But we wouldn't be in this dangerous position if the Ford government had planned for a second wave during the summer."

Ford also announced Thursday that the province will be spending over a billion dollars to bolster testing and case and contact management.

Ontario will spend some of the funds to hire 500 additional contact tracers, bringing the current total to 3,750 case and contact management staff.

Meanwhile, a group of 38 health leaders and physicians is urging the province to place restrictions on non-essential businesses and activities that facilitate social gatherings, saying the recent rise in cases shows immediate action is needed to curb the spread of the virus.

In a statement released by the Ontario Hospital Association, the group says restrictions should target dine-in restaurants and bars, nightclubs, gyms, theatres and places of worship.

It also said the province should ask non-essential businesses to have staff work from home wherever possible.

"While maintaining our province's economy is always a priority, we are extremely concerned that, without action, the current rate of spread will require a return to widespread closure of non-essential businesses and schools to prevent a rise in hospitalizations," the group says.

Ontario reported 409 new cases of COVID-19 on Thursday, and one new death related to the virus.

This report by The Canadian Press was first published Sept. 24, 2020.

Gord Downie's brother Patrick on the 'peace' he hears on new album 'Away is Mine'
Oct 22, 2020 6:46 PM
Comments
We welcome your feedback and encourage you to share your thoughts. We ask that you be respectful of others and their points of view, refrain from personal attacks and stay on topic. To learn about our commenting policies and how we moderate, please read our Community Guidelines.