Toronto Maple Leafs alternate captain Morgan Rielly says he and his teammates are in Matt Dumba's corner as he protests against racial injustice during the NHL's return to competition.
Aug 5, 2020 6:36 PM By: Canadian Press 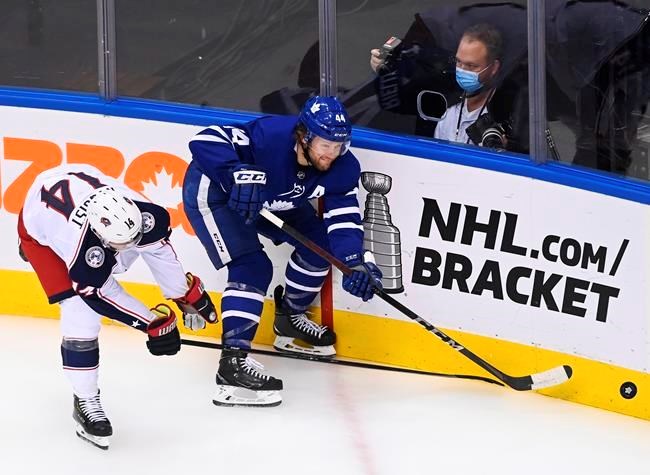 Toronto Maple Leafs alternate captain Morgan Rielly says he and his teammates are in Matt Dumba's corner as he protests against racial injustice during the NHL's return to competition.

However, that doesn't mean the Maple Leaf players will be raising a fist or taking a knee during the pre-game anthems.

"We've definitely talked about it. And I think that as a group, we agree with what (Dumba) had to say in terms of taking action," Rielly said Wednesday. "I think that can take different forms.

"I think that there's been players on our team that have had conversations with outside people, with each other. We've talked about what we want to do moving forward. And we've talked to players that play on other teams about taking action, about doing certain things. We've chosen to go that way."

Dumba, a defenceman for the Minnesota Wild, has been raising his fist during the Canadian and U.S. anthems before games and said he will continue to do so throughout the post-season.

The Regina native, who is half-Filipino, was also the first NHL player to kneel during the restart when he took a knee for the U.S. anthem before Edmonton took on Chicago on Saturday in the first restart game at Rogers Place. He also made a speech at centre ice before the game stressing the need for social and racial justice.

"We obviously haven't had anyone kneel. And I think it's important that you try to respect that," Rielly said. "You want to respect people's opinions on things. In terms of what we're going to do moving forward, we have to continue to talk about that as a team and as a group. We're only going to move forward with certain things if we have everyone on board, and I think that's important."

Athletes from several professional sports leagues have been using their platform to protest racial and social injustice since the death of George Floyd, a Black man, at the hands of Minneapolis police officers in May.

While the protests in the NHL have not been as widespread as in the NBA or Major League Soccer, some players have demonstrated during the pre-game anthems.

"It's time to start doing something, not just let this be a news cycle and forget about it and do it all over again," Lehner said after the game. "Everyone should have the same chance in society, everyone should be treated the same."

The Calgary Flames are counting on Andrew Mangiapane to be a quick study in their brief do-or-die battle with the Winnipeg Jets.

The young Flames winger showed a lack of discipline in Game 2 of the best-of-five playoff qualification series when he took an ill-advised retaliation penalty late in the game, cross-checking Jets forward Cody Eakin.

Calgary, which was looking for an equalizing goal, instead found itself short-handed for the fifth time in the third period, ultimately stumbling to a 3-2 loss that tied the series 1-1.

"Obviously at the time I wasn't thinking and all that, but it's a 3-2 hockey game there, and you're taking a penalty, putting us on a disadvantage," Mangiapane said Wednesday. "Got to learn from it, obviously, and move on."

After a "brief chat" with head coach Geoff Ward, Mangiapane had a nice bounce-back game Tuesday night, chipping in with two assists as the Flames won 6-2 to take a 2-1 series lead.

"I think for him he took the message the right way. I think he had 95 per cent of it figured out himself already."

While Loui Eriksson has seen his offence dry up since joining Vancouver for the 2016-17 season, he came into the Canucks' best-of-five series with Minnesota as one of the team's few battle-tested playoff performers.

That experience is proving to be a boon for the Canucks in this post-season. Eriksson led Vancouver's forwards in even-strength minutes in a 4-3 win over the Wild Tuesday that tied the series 1-1.

He's also been a rock for some of Vancouver's talented but inexperienced core. Canucks coach Travis Green said captain Bo Horvat benefited from having Eriksson on his line.

"I think with Loui, he brings a lot of different things to the game," Canucks coach Travis Green said Wednesday. "I think Bo's line played a lot better last game, and whenever we put Loui there it seems to solidify the line.

"I know if you talk to Bo he enjoys playing with Loui. If Bo's game isn't totally sharp, whenever we put Loui there it seems to help."

This report by The Canadian Press was first published Aug. 5. 2020.