'Music brings us together': Country stars find unity and hope at CCMA Awards

TORONTO — While Brett Kissel couldn't stand before a crowd of thousands at the Canadian Country Music Association Awards on Sunday, he picked up enough trophies to feel the love from a distance. The country singer from Flat Lake, Alta.
Sep 28, 2020 11:43 AM By: Canadian Press 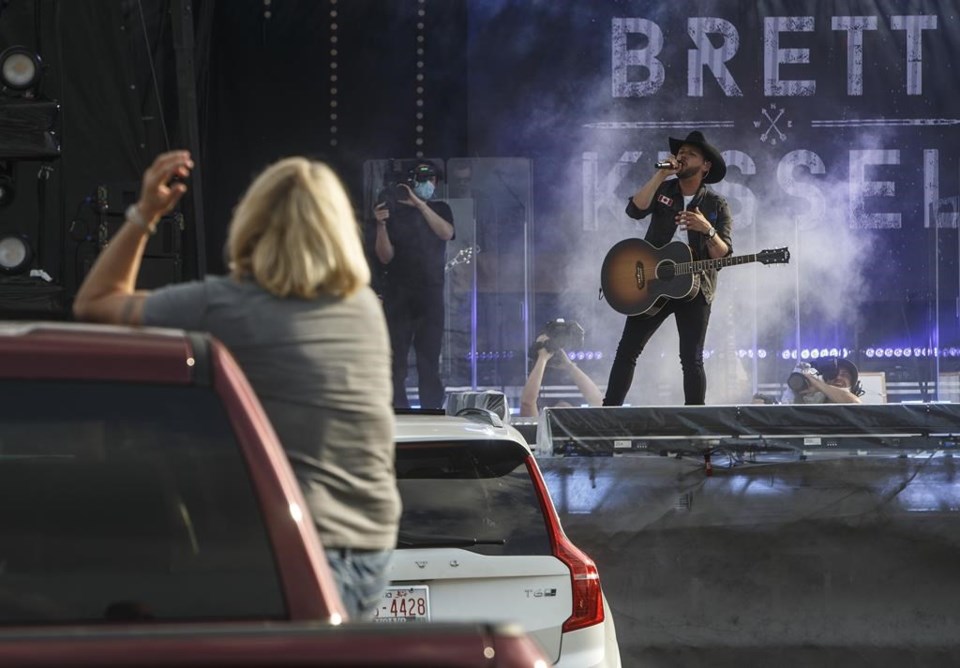 TORONTO — While Brett Kissel couldn't stand before a crowd of thousands at the Canadian Country Music Association Awards on Sunday, he picked up enough trophies to feel the love from a distance.

The country singer from Flat Lake, Alta., emerged one of the big winners of the night, taking home three awards: male artist of the year, fan's choice and album of the year for "Now or Never," while acknowledging this was a celebration in the most difficult of times.

"Lately, we've found ourselves living in a new world, and although some things may look a little different, one thing hasn't changed at all, and that's the music," he said early in the broadcast, which was pre-recorded several weeks ago.

"Music brings us all together, it connects us. Music captures the words that speak to your heart and can tell the stories of your soul. It gives us strength. It gives us hope."

Those words helped set the tone for a CCMA Awards show that recognized the hardships that many people are facing, but didn't dwell on the sadness. First responders were thanked, and one even gave out a top award. Some musicians spoke about better days on the horizon for everyone.

And by the time Kissel's wins culminated in the album of the year award, he was beaming.

"We had so much fun putting my heart and my soul into these eight songs," he said while accepting the honour. "I loved this project more than anything I've ever done in country music."

Kissel also shared a previously announced award for creative director on "Now or Never," during an event on Saturday, which brought his tally this year to four.

Tenille Townes was named top female artist for the second consecutive year, while she shared an award for songwriting on "Jersey on the Wall (I'm Just Asking)," which also landed the video of the year trophy.

Those wins were among the high marks of a slick CCMA Awards show that was heavy on musical performances and light on banter.

The show was pre-taped last month in both the United States and Canada, which helped give the show a city-meets-country flavour.

The more rustic performances played out at the Burl’s Creek Event Grounds in Oro-Medonte, Ont., near Barrie, where the Boots & Hearts Music Festival usually is held. The scene hit its peak when Dean Brody joined the Reklaws to perform their beer-guzzling track "Can't Help Myself" in the middle of a faux tailgate party.

A hotel rooftop in Nashville gave the show its more urban look, and was the spot where several U.S. country artists rocked out to their hits, including Tim McGraw, Kane Brown as well as Sam Hunt and Breland.

Four of Canada's rising female stars — Carolyn Dawn Johnson, Lindsay Ell, Meghan Patrick and Townes — also took to the rooftop in Music City for a poignant cover of Blue Rodeo's "Lost Together" that quietly nodded to the collective feeling of the COVID-19 era.

The Washboard Union walked away double winners, snagging the group or duo award for the third consecutive year. The Vancouver-based trio had already won roots album of the year for their release “Everbound” ahead of the broadcast.

Without an arena packed with boisterous country fans to cheer them on, the Canadian stars were left to lean heavily on their charm, which shone through in lighthearted Q-and-A segments reflecting on life during a pandemic that has left most of them at home instead of touring.

Jade Eagleson credited the experience with strengthening his marriage, while a few others said it revealed their level of patience.

When asked what they learned over the course of quarantine, the performers named everything from playing the piano to mastering the Xbox.

"I baked. I went through the banana bread phase," said Jess Moskaluke.

"I never got to the sourdough phase. Maybe it's yet to come."

This report by The Canadian Press was first published September 27, 2020.