TORONTO — The Maple Leafs say defenceman Jake Muzzin has been discharged from hospital and is back at the team's hotel, but will not return to the lineup during Toronto's playoff qualification series with the Columbus Blue Jackets.
Aug 5, 2020 6:19 PM By: Canadian Press 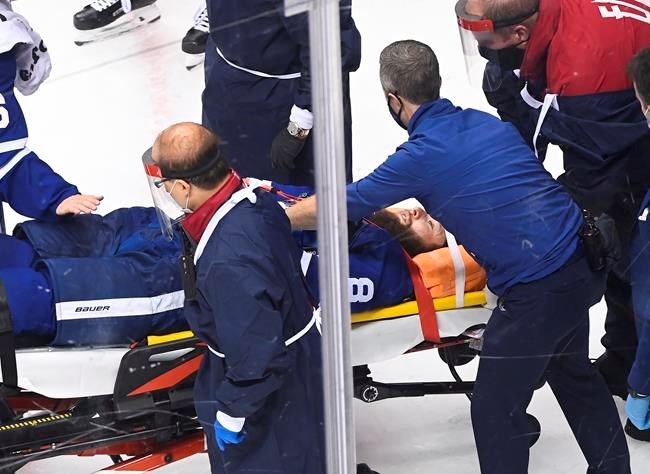 TORONTO — The Maple Leafs say defenceman Jake Muzzin has been discharged from hospital and is back at the team's hotel, but will not return to the lineup during Toronto's playoff qualification series with the Columbus Blue Jackets.

The Maple Leafs said in a statement that Muzzin will remain in quarantine within the hotel and "look to rejoin his teammates upon recovery."

Muzzin was injured late in the third period of Toronto's 3-0 win over Columbus on Tuesday.

With the Leafs killing a penalty, Muzzin took a crosscheck from Columbus centre Pierre-Luc Dubois before stumbling and jamming his head/neck into the leg of Blue Jackets winger Oliver Bjorkstrand.

The bruising blue-liner couldn't get up after the collision and had to be taken off the ice on a stretcher after a delay of around 15 minutes. Players from both teams tapped their sticks in support as Muzzin was assisted off the playing surface.

"That was the first time I've ever seen him need medical attention on the ice," said Maple Leafs forward Kyle Clifford, who also played with Muzzin when the two were members of the Los Angeles Kings. "It was a scary moment, but he's a mentally strong guy. He's a big tough, kid. We're just hoping for speedy recovery."

The best-of-five series, which is tied at one win each, resumes Thursday night at Scotiabank Arena.

Travis Dermott is expected to move the lineup to play with Justin Holl, Muzzin's usual partner.

"He really offers a lot, but I think it's a good opportunity for guys to play more minutes, to play in different situations and rise to the occasion."