Lightning beat Bruins 3-2, improve to 2-0 in seeding round

TORONTO — Tyler Johnson scored the tiebreaking goal with 87 seconds left to lead the Tampa Bay Lightning to a 3-2 victory over Boston on Wednesday and send the Presidents' Trophy-winning Bruins to their second straight loss in the NHL's playoff seedi
Aug 5, 2020 7:27 PM By: Canadian Press 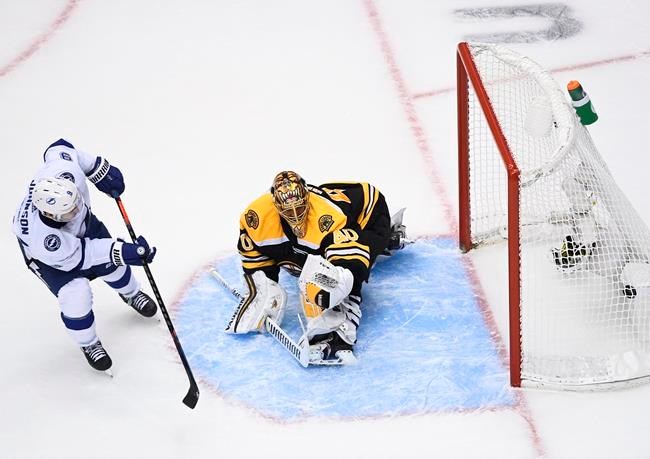 TORONTO — Tyler Johnson scored the tiebreaking goal with 87 seconds left to lead the Tampa Bay Lightning to a 3-2 victory over Boston on Wednesday and send the Presidents' Trophy-winning Bruins to their second straight loss in the NHL's playoff seeding round.

Andrei Vasilevskiy stopped 25 shots for the Lightning, who improved to 2-0 in the three-game round-robin. Tampa Bay, which was second in the East with 92 regular-season points, would earn the top seed with a victory over Philadelphia on Saturday.

“At this point, I don’t think anyone’s really thinking about what happened in the pandemic-shortened regular season," Johnson said. "This is a whole new thing for us and we’re trying to play the best hockey we can.”

Tuukka Rask made 32 saves for the Bruins, who led the NHL with 100 points before the coronavirus shutdown but can now finish no higher than the No. 3 seed in the Eastern Conference.

“That part sucks, I’m not going to lie to you,” Bruins coach Bruce Cassidy said. "But that’s the situation this year with the stoppage of play. We knew the rules going into it.

“We’re just trying to win a hockey game right now,” Cassidy said. “Would I rather be the No. 1 seed? Absolutely. But that’s not going to happen.”

Charlie McAvoy and Chris Wagner scored to help Boston rally from a 2-0 deficit. But in the final minutes Yanni Gourde received a long pass at the blue line and shot it off Rask's left skate.

The puck was sitting there for Johnson to flick it in.

“We’re treating it as if it’s do or die right now,” Lightning forward Blake Coleman said. “Seeding still matters, and obviously the teams that are competing in the qualifiers are going to be ready. It’s really on us to treat it the right way, and if you don’t you’re going to be behind the eight ball.”

The first period was all Tampa Bay.

Brayden Point backhanded a loose puck in front through Rask’s legs about 7 minutes into the game to make it 1-0. Then just 13 seconds into a Boston penalty for too many men on a defensive pairing change, Victor Hedman’s shot from the blue line went off Sean Kuraly’s stick and then Alex Killorn redirected it with his skate into the net to make it 2-0.

But the Bruins cut the deficit to one goal with three minutes left in the second when Bergeron won a faceoff, tapping it back to Torey Krug at the point. He slid it over to McAvoy, who slapped it past Vasilevskiy.

Wagner tied it early in the third when Zdeno Chara’s shot from the blue line got through Vasilevskiy but hit the post and sat there in the crease before Wagner reached in to tap it in.

Lightning: Finish the seeding round against the Philadelphia Flyers on Saturday.

Bruins: Wrap up the round-robin against the Washington Capitals on Sunday.