Politicians and teachers are calling on the Ontario government to revisit its back-to-school plan as the premier continued to assert the strategy to reopen classrooms does enough to keep students and staff safe from the COVID-19 pandemic.
Aug 5, 2020 9:25 PM By: Canadian Press 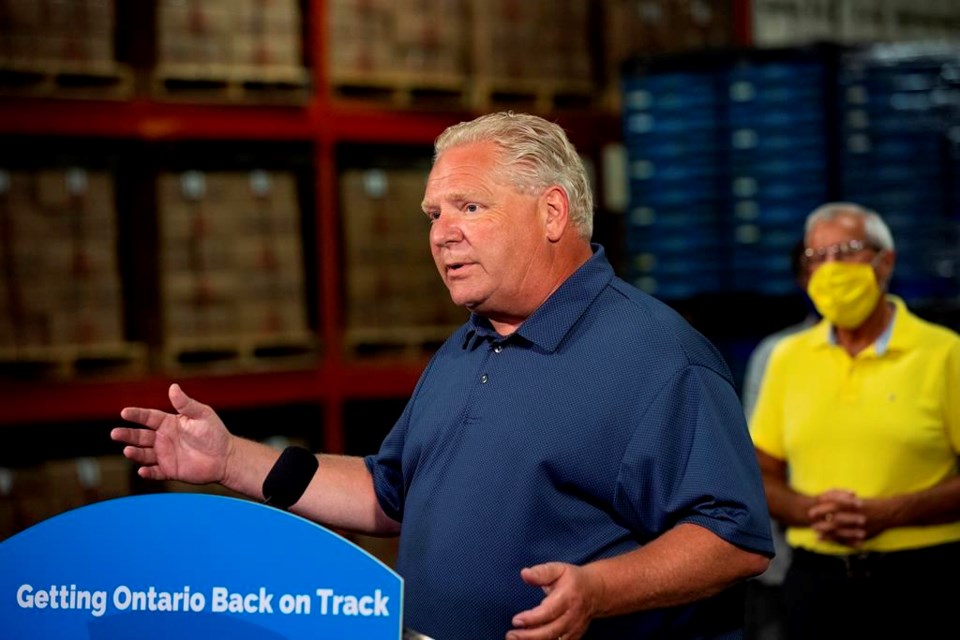 Politicians and teachers are calling on the Ontario government to revisit its back-to-school plan as the premier continued to assert the strategy to reopen classrooms does enough to keep students and staff safe from the COVID-19 pandemic.

Doug Ford stood firm in the face of mounting criticism about the provincial plan, which does not impose maximum class sizes on elementary school students. Opponents describe the strategy as underfunded and unsafe, noting aspects of it are at odds with the scientific advice Ford insists his government is following.

As the premier continued to tout the plan's safety measures, critics called for the province to go back to the drawing board.

"I'm asking Mr. Ford to listen to the parents who are worried," Opposition NDP Leader Andrea Horwath said Wednesday in a statement.

"Listen to the experts that say small class sizes are necessary to keep our kids safe. Time is running out, but it's not too late. We need smaller, safer classes in September."

While the Progressive Conservative government has garnered some praise for aspects of its plan for returning to school next month, the issue of elementary school class sizes has proven contentious since it was announced last week.

The plan will see students in kindergarten through Grade 8 return to school without any reduction in class sizes, though students will spend the day in a single cohort to limit contact with other children.

Most high schoolers will also be in class full-time, though students at two dozen boards across the province will take half their courses online in a bid to curb the spread of the novel coronavirus. Masks will be mandatory for those in Grade 4 and up, while those in Grade 3 and below will be encouraged — though not required — to wear them.

Both federal public health officials and a panel of experts from leading Ontario pediatric hospitals have said physical distancing is a necessary component of any back-to-school plan.

Ford said kindergarten class sizes are capped at 30 students staffed by one teacher and one early childhood educator, arguing such a setup would allow each education worker to oversee a cohort of 15 children. He said extra funds are available for boards requiring extra support, citing $309 million in new education spending announced when the back-to-school plan was unveiled last week.

"If it was up to all of us, we'd have five kids in a classroom," he said at his daily news briefing Wednesday.

Ford repeatedly said the strategy was founded on guidance from experts at Toronto's Hospital for Sick Children and other institutions. The guidance document issued by the hospital last week, however, described smaller class sizes as a "priority strategy" for maintaining physical distancing measures crucial in curbing the spread of COVID-19.

The panel deviated from widespread public health advice slightly by saying a distance of one metre instead of two might be enough among elementary-school students, though two metres is still ideal among older kids. The panel also called for widespread mask use, a measure the government has adopted.

Sick Kids, Cheo and five other pediatric health-care facilities issued a joint statement on Wednesday stating physical distancing and class sizes are among many measures that need to be in place for a safe return to class.

"Our guidance statements stress the critical importance of an appropriate bundle of health and safety measures – with emphasis on hand hygiene, cleaning, physical distancing, class sizes, cohorting, masking for older students when distancing is not possible, and improved ventilation in classrooms," the statement said.

"Only a combined approach to all safety measures will maximize the mitigation of risk."

Education Minister Stephen Lecce backed Ford's support for the strategy, saying it was informed by the best medical and scientific minds in the country.

"We have been clear, we will never waver in our commitment to protecting the health and safety of Ontario's students and education staff," Lecce said in a statement. "That is why we are spending at record levels and taking all the necessary steps to ensure a safe return to schools in September."

Those assertions fell short for Ontario Green Party Leader Mike Schreiner, who urged the government to give scientists an even more active role in shaping the province's return to class.

"Advisors from SickKids hospital clearly recommended that smaller class sizes should be a priority strategy, yet the premier has ignored this recommendation," Schreiner said. "It's time for the premier to cut class sizes instead of corners and make sure schools are safe for our children."

Sam Hammond, president of the Elementary Teachers' Federation of Ontario, also called on the government to substantially revise its back-to-school proposal.

"Boards need funding to reduce class sizes and only Ford can provide that funding," he said.

The ongoing tussle over education came as Ontario reported 86 new cases of COVID-19. Wednesday's numbers marked the third day in a row, and fifth time in a week, that the provincial case figures fell under 100. There were also 146 newly resolved cases and no new deaths.