KINGSTON, Ont. — Ontario skip John Epping needed every last throw to book his ticket for the championship round at the Tim Hortons Brier.
Mar 4, 2020 10:43 PM By: Canadian Press 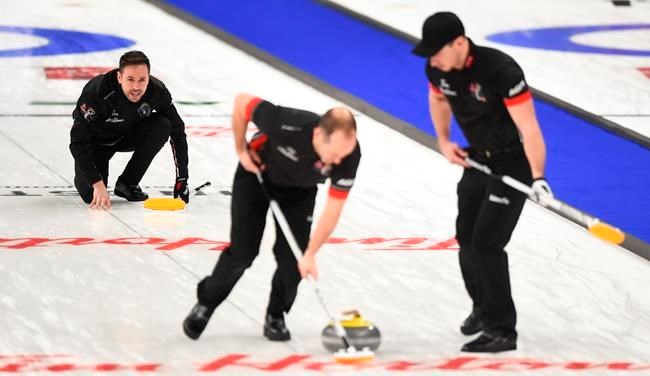 KINGSTON, Ont. — Ontario skip John Epping needed every last throw to book his ticket for the championship round at the Tim Hortons Brier.

He was pushed the distance by Jamie Koe of the Northwest Territories and needed a game-winning hit to score four in the 10th end for an 11-8 victory on Wednesday night at the Leon's Centre.

"A total relief," Epping said. "Especially in that game, we were probably the favourite if you look at the matchup. I think just the relief that we're (still) playing because we feel like we're throwing the rock better than what we're getting."

The Ontario side opened the competition with three straight wins but looked lost at times in the three losses that followed.

Koe led 5-1 after three ends but Epping made an angle-raise for three points in the fourth and controlled the second half of the game.

Records carry over into the championship round, which continues through Friday evening. The top four teams from that round will qualify for the Page playoffs.

"Our mindsets are where they need to be," said Canada lead Ben Hebert. "We certainly didn't think we were going to come in here and roll through undefeated again.

"That usually doesn't happen in a field like this. But there's still lots of room for improvement."

Manitoba's Jason Gunnlaugson (5-2) and Northern Ontario's Brad Jacobs (4-3) had afternoon wins to take the last two Pool B spots behind Alberta's Brendan Bottcher (7-0) and Brad Gushue of Newfoundland and Labrador (6-1).

"We knew we would have had them back again in a tiebreaker if we didn't win and that would have been no fun," Gunnlaugson said. "So it was good to get the win. It was a real good battle.

"They flipped the hammer a couple times and we just kept battling and got some key deuces."

The top-ranked Jacobs, meanwhile, enters the championship round on a three-game win streak after dropping three of his first four games.

"We welcome every bit of adversity and hardship," Jacobs said. "It's the Canadian championships. It's not supposed to be easy."

The bottom four in Pool A included New Brunswick at 3-4, British Columbia and the Northwest Territories at 2-5 and Yukon at 0-7.

The semifinal and final are set for Sunday.