TORONTO — Nick Nurse saw his Toronto Raptors turn the heat on the best team in basketball Tuesday night. But only for a time against the Milwaukee Bucks. "We were incredible for 22 minutes. There was hardly a bad possession," Nurse said.
Feb 25, 2020 11:42 PM By: Canadian Press 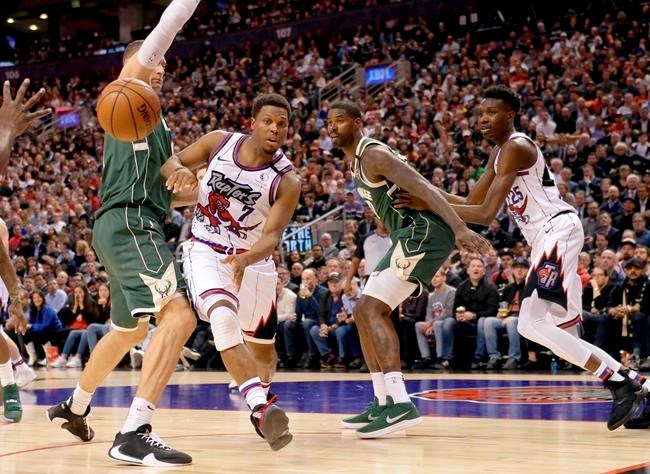 TORONTO — Nick Nurse saw his Toronto Raptors turn the heat on the best team in basketball Tuesday night. But only for a time against the Milwaukee Bucks.

Khris Middleton led the Bucks with 22 points as Milwaukee notched its 50th win of the season. Giannis Antetokounmpo had 19 points, 19 rebounds and eight assists and Eric Bledsoe added 17 points for Milwaukee.

Pacal Siakam had 22 points, one of six Raptors in double figures. Toronto attempted a franchise-record 52 three-pointers, making 18 before a sellout crowd of 19,993 at Scotiabank Arena.

Serge Ibaka was 1-for-10 from distance while Kyle Lowry was 1-for-7.

"I'd say that when you play these guys or play Golden State, you've got to score with them," said Nurse. "I think our lack of scoring, all of a sudden that takes a little bit of juice out of your defence. I think that was probably the case tonight. We started missing shots, we started losing a little defensive energy and then your defence isn't as good either because your offence made it that way."

Milwaukee's grit in coming back was all the more impressive given it needed overtime to beat Washington the night before and was playing its third game in four days. The Bucks are 8-0 in the second game of a back-to-back set this season.

"We didn't make enough plays, didn't do enough," said Toronto guard Fred VanVleet, who turned 26 on the day. "And that's a great team. So you've got to play up to that level to get a win."

"Our defence was good enough tonight," he added "Our offence wasn't."

"We just started the third (quarter) off slow and didn't make enough shots and we missed a lot of open shots tonight," echoed Lowry, who finished with 10 points and six assists.

Toronto (42-16) started well in the battle of Eastern Conference heavyweights but Milwaukee (50-8) pulled ahead and built a 13-point lead going into the fourth. The Raptors reeled off seven straight points to open the final quarter. Milwaukee regrouped, ran the lead back up to 13 at 95-82 and didn't look back.

It marked the 82nd straight regular-season game that Milwaukee has scored 100 points, giving them sole possession of the third-longest streak in league history. Toronto made the Bucks, who have now won four straight, work for it.

The heavyweight matchup in the East drew Drake, hip-hop star and Raptors global ambassador. He arrived carrying two wrestling-style championship belts, which he handed over to the Raptors mascot perhaps as a reminder of the Raptors championship pedigree.

"You always remember the last time you played here, the feelings you had. It was definitely on my mind," said Antetokounmpo.

They remain the two best teams in the East. And both have been on a roll.

It took a while for the excellence to show Tuesday.

The teams combined to miss their first nine shots before Brook Lopez and Serge Ibaka exchanged three-pointers. Toronto made just two of its first 11 shots, nine of which were from distance. The Bucks weren't much better at three for 10 at the first timeout.

After trailing by as much as six, Toronto fought back to lead 27-25 after a first quarter that saw Antetokounmpo go down after being hit in the face in a collision with Terence Davis. The Raptors only shot 38.5 per cent but hit six three-pointers.

The Raptors pulled ahead 36-29 thanks to back-to-back Matt Thomas threes. The Iowa State rookie, getting minutes because of injuries to others, added another three-pointer in the quarter while showing some playmaking skills.

Playing some tough defence, the Raptors built the lead to 12. But Milwaukee closed out the half on an 11-1 run to cut the lead to 52-50.

The Bucks defence came up big in the third with the visitors leading 84-71 going into the fourth. Toronto shot seven-for-20 in the third quarter.

The teams will play twice more during the regular season with back-to-back meetings April 1 and 3.

The Raptors were without the injured Marc Gasol (hamstring), Norman Powell (finger) and Patrick McCaw (flu).