TORONTO — When Toronto Raptors head coach Nick Nurse wants to change the tempo of a game he just has to look down his bench.
Feb 25, 2020 11:59 PM By: Canadian Press 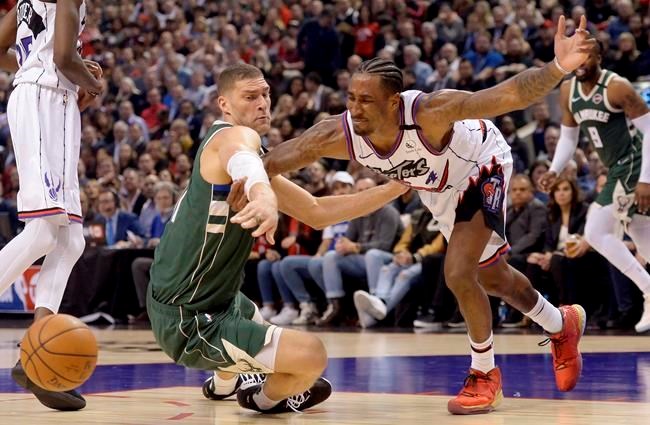 TORONTO — When Toronto Raptors head coach Nick Nurse wants to change the tempo of a game he just has to look down his bench.

Terence Davis and Chris Boucher had 10 points apiece off the bench in Toronto's 108-97 loss to the Milwaukee Bucks on Tuesday night, with Matt Thomas adding nine and Rondae Hollis-Jefferson scoring six. It was important for the Raptors to show their depth against the league-best Bucks, who Toronto could meet in the playoffs.

"We like to come out and compete as a bunch of guys with a chip on our shoulder. Hungry. That's how we play," said Hollis-Jefferson, who led the Raptors with eight rebounds. "If coach needs us to press, whether he needs us to get stops, do the little things, that's how we see it.

"That really drives us defensively and the offence makes the best of it."

The reserves were especially dominant in the second, with Thomas drilling all three of his three-pointers in that period to lead all Raptors' scorers in that quarter. The bench, playing long minutes with all-star guard Kyle Lowry, had Toronto leading by as many as 12 points and a 52-50 lead at half-time.

"It feels good to know that you went out there and impacted the game positively," said Hollis-Jefferson. "At the end of the day that's what it comes down to. Did you get out there and do you do your job? Did you execute what you were supposed to do?"

After the game Nurse pointed to the defensive hustle of his bench, noting that none of them had a negative defensive rating. Thomas was plus-12, Hollis-Jefferson was plus-nine, Boucher plus-six and Davis was zero.

"They were awesome, they were really good, I think," said Nurse. "When you look at the box score and see the plus-minuses? Probably don't expect that at all, right?"

Boucher knows that adding complexity to the Raptors' defensive schemes is part of his job as a reserve, and recognizes that sometimes it's the only way he'll be able to get off the bench.

Hollis-Jefferson says there's value in giving Toronto's starters a break — even if they're still on the floor.

"Being able to give a spark to the starters and take a little bit of pressure off of them at times," said Hollis-Jefferson. "They may be guarding (our opponent's) best players so we come in we can give them a break.

"Now they guard the third best player, fourth best player, whatever the case may be. It gives them a break. We may need points at that moment. We don't all need to play defence, the bench can come in and do that."

This report by The Canadian Press was first published on Feb. 25, 2020.